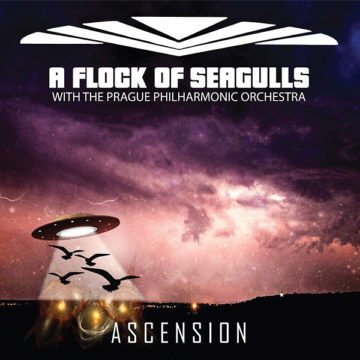 This seems to be a trend. A great many artists, alive and dead, are setting their music with an orchestra. The bands originating from the 1980s are not immune to this new way of revisiting their old songs. Midge Ure, Erasure and The Christians have all re-recorded their biggest hits, as well as album cuts, with an orchestra. Now we have A Flock Of Seagulls, playing with The Prague Philharmonic Orchestra. What makes Ascension a little more special is that this is the first new recording by A Flock Of Seagulls, featuring the four original members, since 1984’s The Story Of A Young Heart. It is also the first studio album by A Flock Of Seagulls, since 1995’s The Light At The End Of The World, that featured only one original member, Mike Score.

The classic lineup, Mike Score (vocals, guitar, keyboards), Ali Score (drums), Paul Reynolds (guitar) and Frank Maudsley (bass) have reunited to re-record some of their classic hits and album cuts with The Prague Philharmonic Orchestra. The good news, it works. A Flock Of Seagulls always wrote very melodic songs, they featured the synth as a main part of their band, but they were, at heart, a pop/rock band. They had an ear for strong tunes and that comes across through the use of an orchestra.

The orchestra provides a whole new aspect to these songs. Yes, the band is at the core, but the arrangements for the orchestra flush out what has always been there. Give a listen to “Modern Love Is Automatic”, the intro of that song is sound beautiful and is in contrast to the original, more electronic based song.

The original lineup seems to have picked up with they left off. They play extremely well together and the core unit is as tight as they have ever been. A Flock Of Seagulls were a talented band, and their musicality was overlooked due to their image. This is a shame, as they were and are a talented band.

Vocally, Score sounds the same. I have always been a fan of the lyrics of their songs, in this format, the vocals are more prominent and the lyrics come through beautifully. “Nightmares” is an excellent example. Those lyrics and the orchestral arrangement makes it an even more haunting and frightening song.

This format, working with an orchestra, is not new. The Beatles used orchestras to full effect and who can forget Zappa or Procol Harum. But this is a new trend, and it does not work with every artist. In this situation, it works. The music of A Flock of Seagulls lends itself to these arrangements.

Fans may want to know that there is a limited, five disc version of Ascension, that if you are a diehard and/or collector might be of interest. The discs feature versions of “Ascension”, including an instrumental version, which is quite a good listening experience.

Born and raised in Whitby, Aaron discovered music through his love of The Beatles. This led to a career in radio, writing for various publications, and ultimately a radio show about The Beatles (Beatles Universe), which ran for over four years. When not immersed in music, Aaron enjoys spending time with the loves of his life -- his wife Andrea, and daughters Emily and Linda (all of whom have an intense love of music too).
RELATED ARTICLES
a flock of seagullsalbum reviewalbum reviews

SPILL NEWS: A FLOCK OF SEAGULLS RETURNS WITH “SAY YOU LOVE ME” | LEAD SINGLE FROM THEIR NEW ALBUM ‘STRING THEORY’

by SPILL NEWS on June 28, 2021
A FLOCK OF SEAGULLS RETURNS WITH “SAY YOU LOVE ME” | LEAD SINGLE FROM THEIR NEW ALBUM STRING THEORY A Flock Of [...]

by Aaron Badgley on June 22, 2018
ASCENSION A CONVERSATION WITH MIKE SCORE OF A FLOCK OF SEAGULLS A Flock of Seagulls was formed by guitarist and keyboardist Mike Score in 1980. He was [...]