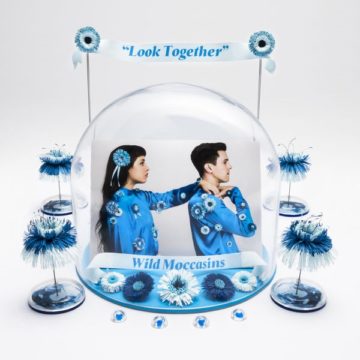 Look Together is this generation’s Rumours. Co-written by the core members of Wild Moccasins, Zahira Gutierrez and Cody Swann, the album lyrically and musically documents the break-up of Swann and Gutierrez. Look Together is the first album by Wild Moccasins since their 2013 release 88 92. Following the release of 88 92, members of the band left and Swann and Gutierrez, who had been in a long term relationship, fell apart. All of this was occurring while they were touring.

Look Together is their third album to date and they have come a long way since their debut in 2010 (Skin Collison Past). There have also been changes within and without the band. Gutierrez (vocals and keyboards) and Swann (vocals and guitars) are joined by Nicholas Cody (bass) and  new member Avery Davis (drums). They are also working with a new producer, Ben H. Allen (Animal Collective; Gnarls Barkley; Deerhunter). He brings in a new, harder dance sound mixed with the singer/songwriter vibe the creates. Allen also allows the band to dip into their musical influences, which works throughout the album. Shades of the 1980s and current pop mix with singer/songwriter and rhythm and blues. It makes for an interesting combination.

This is a great album, although given the background of Look Together, it can be uncomfortable at times. As the album plays, one also hopes for a positive resolution, which is not to come. The last song on the album, “Waterless Cup” is simply heartbreaking and Gutierrez gives her best vocal performance on the album. Excellent use of layered sounds, including a brooding synthesizer background.

But to their credit, they manage to get both of their points across without once resorting to viciousness or cruelty. “With a little magic, this could be less tragic” sings Gutierrez in “Desired Effect”.  She is not blaming Swann, simply realizing the situation is now beyond them. Each relies on their emotions and feelings rather than pointing fingers. Look Together is a creative and unique album. I seem to say this a great deal, but this is another album that one benefits from listening from beginning to end.

Wild Moccasins have made an intensely personal album with a hell of a dance beat at times. Swann and Gutierrez have taken a private and painful experience and made great art. A true talent and a truly incredible listening experience.

Born and raised in Whitby, Aaron discovered music through his love of The Beatles. This led to a career in radio, writing for various publications, and ultimately a radio show about The Beatles (Beatles Universe), which ran for over four years. When not immersed in music, Aaron enjoys spending time with the loves of his life -- his wife Andrea, and daughters Emily and Linda (all of whom have an intense love of music too).
RELATED ARTICLES
album reviewalbum reviewsboyish wave
9.0