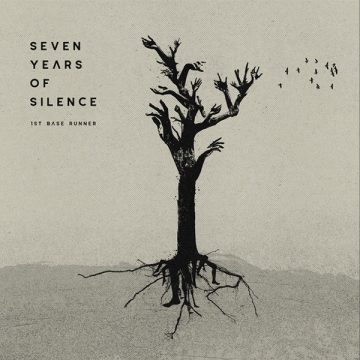 There are two ways you can approach music in dark times like these. One is to make music as dark or even darker. The other is to do completely the opposite and come up with some light, fluffy stuff, if you will.

Both serve their purpose. The lighter stuff will help you get rid of depressive thoughts and in that manner make you pull through. On the other hand, darker stuff will make you think and reflect, so many people would rather stay away from it. While it certainly can be a double-edged sword, such dark music might actually be the one that can show you the way to pull through.

One such dark-toned release is Seven Years of Silence by Austin, Texas artist Tim Husmann, aka 1st Base Runner. Husmann might seem as a completely new name under his pseudonym, but he’s been around for a while as a multi-instrumentalist supporting a number of big acts like Neko Case. Actually, he did take a number of years off between his support and solo incarnations, and this album is the result.

Sure, dark tones do permeate the eight tracks here, but Husmann’s instrumental and vocal capabilities and well thought out lyrics do exactly what such music should do — ponder and reflect without pulling you into its vortex, but actually making you see the ways how to pull through. No wonder Universal decided to pick up on this initially independent release.

Formerly a lot of things, including a journalist and a translator, currently a freelance writer living in The Netherlands.
RELATED ARTICLES
album reviewalbum reviewsuniversal
8.0