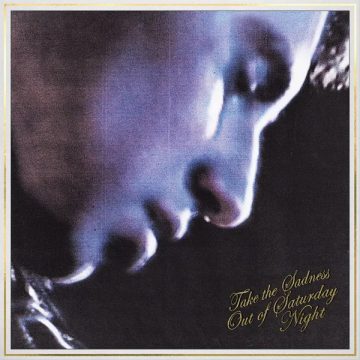 Bleachers
Take The Sadness Out Of Saturday Night
RCA

I have this friend. He was on the aux. And he was playing “Chinatown,” then the newest Bleachers single, over and fucking over. This time, I didn’t mind. From the first huge chorus on it was an easy song to love.

Then Bruce Springsteen’s voice came in out of nowhere and it got even better.

Bleachers mastermind Jack Antonoff has always been defined by the famous people around him – as a high-profile producer, it’s actually his job. In the years since the last Bleachers album, 2017’s Gone Now, Antonoff has reached a new level of acclaim for his work behind the boards – sitting in on career highlights from famous friends like Lorde and Taylor Swift (and winning an album of the year Grammy for his work with the latter). As a producer, Antonoff has proven himself as a musical chameleon, doing what he needs to support an artist’s sound, rather than forcing them into a formula. It’s impressive that the same guy who produced the funk worship of St. Vincent’s Daddy’s Home also had a hand in the folky sounds on Clairo’s newest, Sling, just a few months apart.

When it comes to the music released with his own band, however, Antonoff has always had just one sound – anthemic, kind of corny and clearly in the tradition of Born in the U.S.A.-era Springsteen. When it hits, it’s undeniable – music you can listen to three times in a row and still be revved up for the fourth (like I said, from experience). When it doesn’t, it’s ‘80s karaoke with a better drum sound.

So, does one of music’s most in-demand producers change it up? Is this his chance to chase a style all his own after years of helping other artists find theirs? The answer to both those questions is a resounding no. Like its predecessors, Take the Sadness out of Saturday Night is a fun, expertly produced and totally uneven collection of heartland pop-rock. The highs are high. The filler is plentiful.

Four singles came out in advance of Take the Sadness out of Saturday Night and each one is a Springsteen-indebted earworm that’s worthy of the repeat treatment. The aforementioned “Chinatown” makes the most of its Boss cameo and left me wondering what a full-length team-up between the two would sound like. “How Dare You Want More,” meanwhile, is a jittery romp complete with E-Street style saxophone blasts. Antonoff sounds like he’s having a blast here, shouting nonsense about the joys of “drowning out the sound” of his mother and preacher. Who can’t relate?

Further down the tracklist there’s “Stop Making this Hurt,” the catchiest song on the album and a masterpiece in bombast. The lyrics are all open roads and “trying to break free of New Jersey”, long covered territory by a certain on-album guest star, the instrumentation a symphony of new wavey synths and percussion. “45” brings down the tempo but keeps up the energy. The song reminds me of some of the ballads of fellow Jersey-boy Brian Fallon, an unexpected similarity that doesn’t just come from a shared song title.

That’s the good. Unfortunately, it’s less than half the album. While Antonoff’s production prowess keeps the duds solidly in the “listenable” territory, it’s still pretty forgettable stuff. The worst comes when Antonoff forces some of his newest studio tricks – like the soft acoustic touches of Folklore and Sling – into the Bleachers context. While Antonoff is always good for an occasionally interesting turn of phrase (“Now you can dance with anyone / tattoo yourself a fucking sleeve”), he’s still not a lyricist worthy of the singer-songwriter treatment. “Secret life” slots in between some of the album’s highlights and kills the momentum with its sluggish arrangement. Album closer “All This Faith” is moody snoozer without so much as a chorus, ending things on a sour note. As a producer, Antonoff does a great job of playing to his artists’ strengths. These songs make me wonder if he truly knows his own.

Ultimately, how much mileage you get out of Take the Sadness Out of Saturday Night comes down to expectations. Does having your name on the credits of multiple top-tier albums mean you should be expected to make one all on your own? If a handful of great-sounding singles from a guy who knows how to make great sounding music is enough for you, then you’re in for a real treat. Maybe one of those songs will even be the one you just need to play on repeat.

Spill Magazine strives to keep our readers up to date with news and events in the music industry. We keep you informed of the most recent information regarding new releases, tour dates, and information items about your favourite artists.
RELATED ARTICLES
album reviewalbum reviewsbleachers
8.0