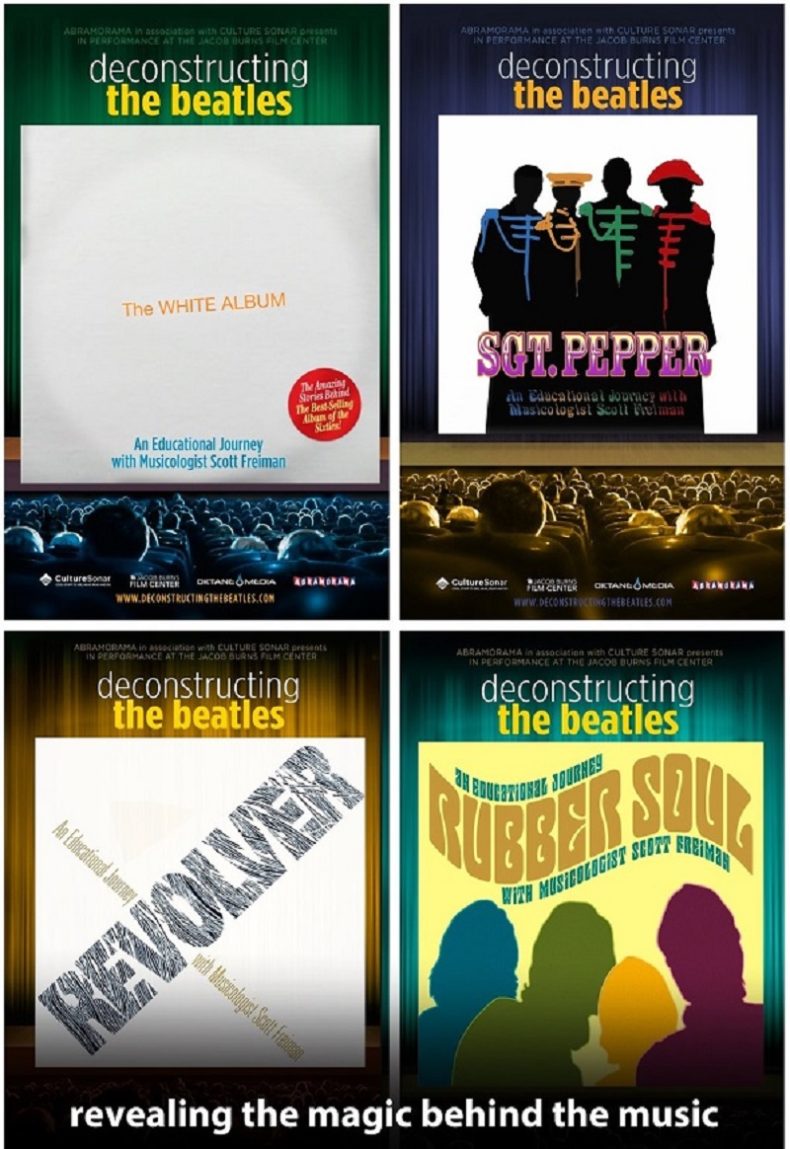 Deconstructing The Beatles is a four DVD set comprised of four previously released DVDs. Each one had been released separately, but now here they all are, all four are compiled into one convenient DVD set. Each disc looks at a specific Beatles album, and each disc features a lecture from Scott Freiman, a reknown Beatles expert, author, and musician in his own right.

Freiman delivers four very interesting and intriguing lectures about the making of Rubber Soul, Revolver, Sgt. Pepper’s Lonely Hearts Club Band and The Beatles (aka The White Album). He also includes the singles released at the same time of each album. So, for example, he talks about “Day Tripper” and “We Can Work It Out” while talking about Rubber Soul, as that single was released at the same time as Rubber Soul. As he delivers each lecture, he illustrates his point with music from the album, from demo to completion. This makes for an interesting lecture. Think of it as Ted Talks for Beatles fans.

He knows his subject. It is obvious he knows this material like the back of his hand, so the lecture is more of a conversation than a dry talk. He talks to his audience as if he is talking to a group of fans and his love of the music comes through. It is as if he is enjoying the talk as much as the audience listening does. He simply loves The Beatles.

He is honest with the material and even though he loves the band, he remains objective, and as such is clear as to what works and what does not in their sessions. He is thorough with each session and each step in the process of The Beatles making their classic albums. The stories he relates are funny and entertaining. He tells the tale in chronological order, which allows the viewer to follow the progression of each album. He also uses quotations from The Beatles and George Martin, which adds a great deal.

Freiman also discusses the context and the environment in which the music is created. In this sense it helps set the scene for the albums, as The Beatles did not create in isolation. They were influenced as much as they influenced others. Freiman explores this with each album.

Overall, a well put together set. You will learn a great deal about each album, and enjoy the quizzes that Freiman gives (I got 100%). He is very watchable, and because he knows and loves his subject well the talks are great to watch. There is also bonus material on the DVDs that add to your knowledge of The Beatles.

Born and raised in Whitby, Aaron discovered music through his love of The Beatles. This led to a career in radio, writing for various publications, and ultimately a radio show about The Beatles (Beatles Universe), which ran for over four years. When not immersed in music, Aaron enjoys spending time with the loves of his life -- his wife Andrea, and daughters Emily and Linda (all of whom have an intense love of music too).
RELATED ARTICLES
dvdfilm reviewthe beatles

by SPILL NEWS on November 16, 2015
CONTEST CLOSED   for a chance to win 1-of-10 DVD of the Scorpions documentary Forever And A Day! To win your copy of the upcoming DVD just RT the Spill contest Twitter post [...]