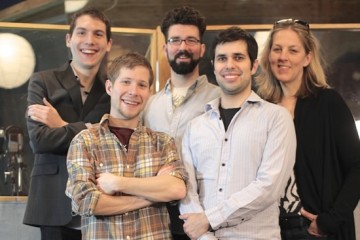 On what would be the last legs of a 10-day tour, a modern jazz quintet “Gray Matter” made a two-day stop in Toronto to perform their genre-bending, forward-thinking jazz for a very enthusiastic audience. What is even more special is that throughout this tour they are promoting a brand new CD of original compositions that is a potpourri of funk, hip hop, and modern jazz that gives the band a unique identity of its own.

The “Gray” in this band is named after drummer Derek Gray and bassist Justin Gray, brothers and fine musicians who compose, perform, and provide rhythmic support for the ensemble. Rounding out the quintet is pianist Todd Pentney, Vancouver saxophonist Eli Bennett and New York-based trumpeter Ingrid Jensen. Through this potent lineup, they really cooked up some engaging music that points to the future of jazz and beyond while staying grounded in the fundamentals of groove, rhythm, and improvisation.

The first set opened with a medley of songs, “Footprints” and “Today is the Day.” “Footprints” is an intriguing number that shifts between 4/4 and 7/4 time while keeping a steady funky beat throughout the piece. Pentney in this opening melody shows his funky and groovy side in his solo passage on the electronic Hammond B3 organ while the groove is supplied strongly by the Gray brothers during the solo passage. Jensen’s solo on the trumpet brings an energy that echoes the later works of Freddie Hubbard at times. After Pentney’s moving piano interlude, the ensemble breaks into “Today is the Day” which slows down in pace but picks up in intensity and groove when Bennett solos to the point of achieving “sheets of sound.”

“One By One” delves into the ambient/trance vibe through Derek’s rhythmic setup on the drums, leading into Justin’s solo that has a horn-like sensibility applied to the electric bass. Bennett’s saxophone playing becomes more intense and electrifying, in lieu of the intense groove applied through Derek’s drums, Justin’s bass, and pentney’s accompaniment on the electric organ.

On a somber note, there were two compositions in the set that were dedicated to the memory of beloved Canadian politician Jack Layton, both written by Derek along with lyrics by special guest singer Jillian Harris. In the first piece “For J.L.,” the rhythm section provides a free-flowing introduction that is dreamlike, futuristic, and heavenly at the same time. The heavenly motif is applied throughout by Jillian’s vocal, which is angelic, soothing and peaceful while celebrating the life of a respected Canadian. Pentney’s piano solo is very moving that breathes life and hope into the memorable piece. On “Eulogy,” the piece opens with a sample of the sermon given at Jack Layton’s funeral by the Rev. Dr. Brent Hawkes (senior pastor of the Metropolitan Community Church of Toronto). After the sample, Jillian enters the song with her emotionally charged and poetic lyrics. Throughout the performance there was a gospel hymn quality that made you feel at church, while taking the time to remember and celebrate a man who impacted the lives of many. To make it extra special, Jack Layton’s widow Olivia Chow and the Rev. Dr. Brent Hawkes were in attendance on the opening night of the Toronto leg of the tour to witness these wonderful creations in person.

To cap off the set, the composition “Wake Up” started off with a energetic, rhythmic, and swinging solo by Derek, before shifting into Latin and bebop figures by the band in its opening passages. Jensen’s trumpet solo becomes highly energetic and soars mightily through the changes, and Bennett’s saxophone solo navigates the shifts effectively from Latin rhythms into straight-ahead bebop. Before closing the number on an energetic note, there is a cool unison passage by the horn players before taking it to a close.

Gray Matter is a cutting edge band to look out for in the months and years to come. Through their incorporation of funk, hip-hop, electronica rhythms and jazz, it is bound to win new audiences with its collective sounds, rhythms and compositions.

Conrad Gayle is a jazz pianist, composer, and writer. He released three albums, "Genesis EP", "Foundations" and "The Live Sessions 09/10", his first book "The Real Conrad Black", has an active YouTube channel and maintains his own blog site called "The Conrad Gayle Review". He is a graduate from York University with a degree in sociology. He is also active in the city of Toronto as a solo artist and leader of his own trio, as well as being the regular pianist in his home church. He has written for the Spill Magazine for over four years and is planning on continuing the course to become a very successful writer.
RELATED ARTICLES
live reviewstoronto