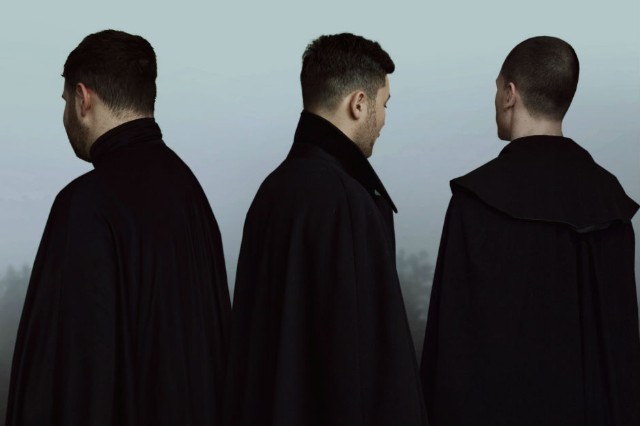 There were certainly a lot of great looking people milling about during the cocktail party-like atmosphere that night. Lots of hugs and smiles under the chandeliers and blue, purple and green lights. Even opening act BANNERS (Michael Joseph Nelson) got in on the schmoozing, taking photos with numerous crowd members as people awaited Young Empires to hit the stage.

When the stage lights darkened, the crowd erupted into a cheer as the Toronto-based group emerged all adorned in black, silhouetted by pulsating floor lights. Young Empires’ opening song, “Ghosts” reverberated through the club, the bass shaking the floor as if the engines of a rocket ship were preparing for takeoff. It was a bold, majestic presentation of one of the group’s songs off of The Gates album. Young Empires was prepared to whisk us all away and take everyone to their very own musical galaxy.

Fittingly, after a quick acknowledgement of being back home, the group quickly launched into “Enter Through The Sun”, a high-energy piece that started to get the laid back audience dancing, nodding their heads to the music and following the instructions of putting their hands in the air.

Although some of the lighting simulated spinning among the stars, there was no doubt of the Latin influence found within Young Empires’ self-declared “haute rock” compositions, such as when “Rain of Gold” was performed.

While the five-piece danced and bounced on stage, clearly working in a groove, the best received song from the crowd was reserved for “Uncover Your Eyes”, again off The Gates album.

Breakout song, “White Doves” was given a harder, fuzzy treatment, almost enticing the club to march and chant alongside Vlahovich.

The voyage ended with “The Gates”, which bassist Jacob Palahuk noted was the first and most important song thematically for the album with the same name. It was a safe and wonderful escape….except for those continuing on with the afterparty.

Young Empires continues their tour with stops in New York City, Philadelphia, Washington D.C., Los Angeles and Austin before returning back to Canada to play in Ottawa during the month of June.

An educator who also tries to introduce others to great music. It's a never ending job.
RELATED ARTICLES
bannerslive reviewsthe mod club theatre

by SPILL NEW MUSIC on August 26, 2022
BANNERS RETURNS WITH HIS SOARING NEW SINGLE “HAPPIER” NETTWERK MUSIC GROUP After recently returning to deliver his [...]

by SPILL NEW MUSIC on April 2, 2019
BANNERS RELEASE “GOT IT IN YOU” TRACK OUT NOW VIA ISLAND RECORDS/UNIVERSAL MUSIC “This song is a bit of a reminder [...]

by SPILL NEW MUSIC on April 13, 2018
BANNERS “SOMEONE TO YOU” THE SOUNDTRACK FOR ‘AMERICAN IDOL’ AMERICAN IDOL MENTOR APPEARANCE ON APRIL 16 + HEADLINE CANADIAN TOUR [...]
8.0