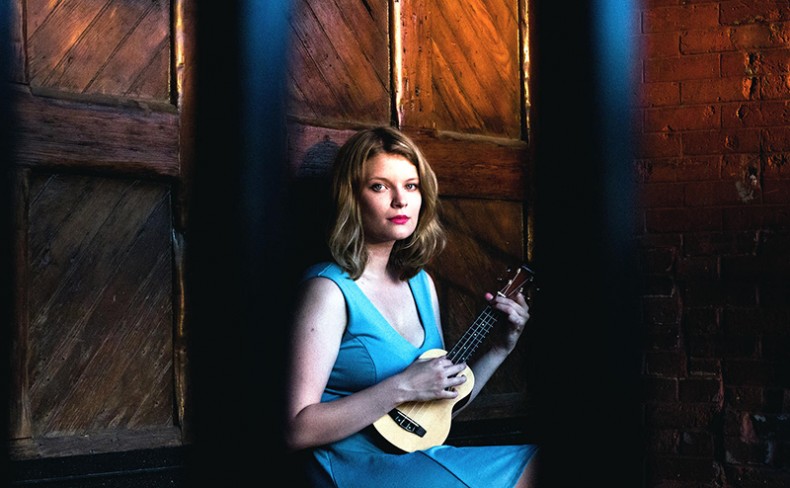 Finnish songstress Peppina swung briefly through Los Angeles on her way back to her native Helsinki via Park City, Utah, Washington DC and New York City this week. All in all, she’s been in the States three weeks performing and recording her new album, a follow up to her debut 2015 EP Follow Your Gravity. She made time to squeeze in a short set at brand-new music venue Resident LA, on the fringes of downtown LA’s burgeoning Arts District.

Even though she’s only twenty, this wasn’t Peppina’s first rodeo and this show shows her chops as she segues from ingénue to established artist. She’s been to the Sundance Film Festival three times including this past January’s trip, where she clocked five performances in five days. She performed at the official Sundance “Base Camp,” the ASCAP Music Café (both on her own, with a full band and with frequent collaborators Motopony), the Toyota Music Lodge, The Art Lounge and at a publication party for lawyer Steven Beer’s book on raising a child in the entertainment industry.

Peppina took to the stage solo, armed with acoustic guitar and keyboard. Her voice was clear, lilting and smooth, with just the hints of cracks at the edges that keep her from sounding TOO sweet and pretty. Her music and lyrics—well spiced with irony and clever turns of phrase for a Finnish artist singing in English—are informed but not world-weary, and her arrangements spare and economical yet richly tuneful. When she’s performing with a band (she’s a frequent collaborator with Seattle indie artists Motopony), her music takes on a different character. While performing solo she’s direct, in your face and musically very present.

She opened with “Still Alone, Together” on a Nord Stage 2 88 for equipment geeks out there—this has really become the axe of choice for everyone from Peppina to the annoying guy that plays covers at Sunday brunch and Peppina wields it with confidence and enthusiasm. “Still Alone, Together” is a somber song reflecting upon a troubled love. Its somewhat heavy mood is punctuated by deep chords and haunting melodies from Peppina’s spritely yet soulful voice, much reminiscent of Regina Spektor and Florence Welch. Here’s a link to her performing it at the ASCAP Sundance Café.

She switched over to guitar for “Against the Grain.” Peppina’s simultaneously strong and delicate voice powers this catchy song, which evoked a bare-bones feel that is perfect for rainy-day listening, but it still played lightly and well on a balmy downtown LA night.

Her next song, “What Does it Take,” also featured her on solo acoustic guitar. She remarked that she performed at the Orpheum Theatre downtown with Joseph Gordon Levitt. She recalled performing this song in front of 1500-plus people and now in front of a small and enthusiastic audience, fueled in part by an absinthe tasting going on at Resident at the same time.

She went back to piano for “Mademoiselle Noir,” a simple, delicate jingling cover composed of staccato, barrelhouse (or cabaret) piano hopping alongside Peppina’s voice as it weaves between soft and loud verses. She narrates the tale of the lovelorn Mademoiselle Noir with the occasional French lyric further emphasizing her plight. Another hitRECord collaboration, it features a terrific Edward Gorey-esque video HERE.

Gordon-Levitt himself waxes poetical about this song: “This theme’s all about the outlaws, the outliers, and the odd ones out that march to the beat of their own drummer. Often times an outsider can become the hero of the story and go on to triumphant pursuits with happy endings. However, sometimes in our society the outsider speaks such a different language we misunderstand and vilify the otherwise beautiful and innocent. Mademoiselle Noir is one such harrowing tale of a woman who was misunderstood by the people around her and met a tragic fate.” Peppina sang Mademoiselle Noir’s tale with both verve and pathos.

She closed her show with a fan favorite, “We Can Go Back Again.” This tune focuses on Peppina’s soft and hypnotizing voice at it revolves around the theme of going back and revisiting a simpler, easier point in a relationship. She switched back and forth between piano and guitar, which in the studio single surge in and out of the track with drums, violin, and electric guitar to highlight its turbulent theme.  Her live performance highlighted its wishful, plaintive theme. We CAN go back again, can’t we? With Peppina, we sure hope so.

Peppina was one of the first artists to play the brand-new downtown performance space Resident LA, which lent Peppina’s performance an air of both intimacy and clarity. Concrete floors, exposed wooden ceiling and brick walls with discreet baffles, the room tapers to a narrow point from the wide stage. It is much more neutral acoustically than the materials might suggest, and the spanking-new EV sound system is first-rate.

Lucy Rendler-Kaplan is a native Chicagoan, recently returning home after 10 years in Los Angeles. Having worked in field marketing for the past 17 years, Lucy recently left corporate America to work as a consultant. When not running, Lucy can most often be found out with her dog, watching an NFL game, or listening to live local music. Passionate about writing, Lucy enjoys writing about music in lieu of playing it.
RELATED ARTICLES
live reviewslos angeles