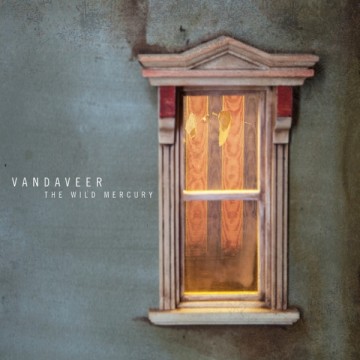 A symphonic lyrical epiphany to soothe your soul.

Vandaveer’s fifth and career-defining LP, The Wild Mercury, is a living example of how an Americana-influenced folk band can thrive in today’s evolving music scene. They do fans justice by following their roots for a sound you’ve come to love, consistently putting out charming and alluring music that soothes the soul. Their old-timey sound of angelic harmonies combined with hearty rustic guitar leads to a titillating production.

The album abruptly begins with an eerie hum that sounds like a psychedelic orchestral trip, then smoothly transitions into Mark Heidinger’s piercing vocals. The song titled “But Enough On That For Now” immediately begins to paint a lucid picture in the listener’s mind. Heidinger’s vocals are subsequently joined by the tantalizingly powerful harmonies of Rose Guerin with male to female dichotomy playing off each other exquisitely. Together, hitting notes in unison in these epic crescendos is enough to give you goose bumps. These accompanying harmonies seem to dance over the clean strums of guitar that lead the listener down a happy-go-lucky journey being sung by the narrator. By track three, the title track “The wild Mercury,” I’m completely on board the Vandaveer ship. They infuse beautiful imagery with their lyrical choice which is almost trancelike, placing the listener as the character in the song. Many of the scenes set, whether it be playing in an arcade or staring out the window of a car on a country road trip on a warm summer day, I forget how much I am actually enjoying the song as it lets my imagination run wild. All this with the band as they set the stage with the tones of slightly distorted guitars and soothing singing.

Love, loss, adventure and life experience are some of the many themes touched upon on this album and each song acts as another chapter, all emotional and compelling in their own way. By track four, “A Little Worse for the Wear,” Heidinger’s soft voice coddles you, telling the woes of a man struggling with personal demons and the courage to stay strong. With whispering winds underneath, this story sets a gloomy atmosphere, enough to give you chills following the protagonist’s sorrows. Each of the songs on the LP subtly switch up the pacing and rhythm from slow ominous ballads that make for a good listen to faster-tempoed, upbeat choruses to sing along with in the car. Overall the LP keeps you invested in the next track out of sheer curiosity of where the inviting duet will take you. The entangled lyrics combined with the underestimated simplicity of twangy guitar and very minimal percussion on, say, “Holding Patterns,” for example,give an intimate homely feel to the tune. While tracks like “Love is Melancholy, But it’s All We’ve Got,” has a southern strum to it combined with a ruminant chug of a bounding train. Enchanting lines are sprinkled throughout the piece that encapsulate a couple getting through hard times but, as the title suggests, always having love.

Next up, “To be Young, to Belong,” seems to be a dispirited story about a youth battling with drugs and acceptance. Track eight, “The Final Word,” contains many lustful lines; for instance, “…to lose my head for your duress,” “lovers in love, not just in name” and many others that seem to jump out attempting to put in words the indescribable joyous feeling. It comes to a close with the proficient duo belting “Let love be the final word!” That really hits home as it gets repeated passionately many times ‘til it fades off into the distance.

The album then takes a musical turn with “Absolutely over the Moon,” the second last track on the album and one of my favourites. It is a slow, touching narrative that could be written about a close love or (more romantically) a personal muse. The background is a disheartening piano melody that keeps the company of Heidinger’s low raspy voice. He takes on this song solo with a gutturally grave vocal styling that caresses your ear canals, humming a touching recital of self-discovered inspiration. This well-put-together album comes to a strata of symphonized sound including many of the musical elements used in the previous songs. The Wild Mercury LP Wraps up admirably with a track called “A Pretty Thin Line.” Coupled with the hymns of Heidinger and Guerin is a piercing slide guitar to add another layer to the seven-minute instrumental cacophony. The recording ends abruptly with the title line “It’s… a pretty thin line” and an off-beat snare hit leaving you wanting more, ready to hit play all over again.

Overall I found this album to be a wonderful wave of poetic tales that clearly expresses deep emotion on a variety of subjects. Through this album Vandaveer has grown on me. Even if you are not a fan of folk per se, the lyrical content mixed with transcending harmonies alone should be enough to entice you to give it a listen. Who knows, it might just bring out your inner muse.

Here's what we think...
Spill Rating
Fan Rating
Rate Here
New Criteria
10
8.5
8.0
Total Spill Rating
8.5
Total Fan Rating
You have rated this
Album Reviews
absolutely over the moonalbum reviewsbut enough on that for nowthe wild mercuryvandaveerwhite space records
absolutely over the moon, album reviews, but enough on that for now, the wild mercury, vandaveer, white space records
About the Author
Dylan Weller