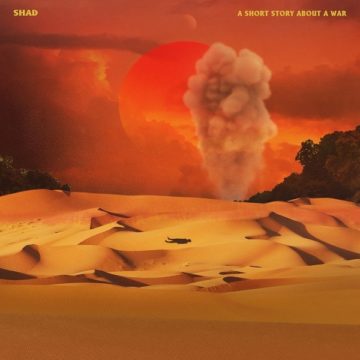 Shad
A Short Story About A War
Secret City Records

With the sporadic ramblings from pop stars and other notable lunatics controlling the climate of political reliability and social information, A Short Story About A War delivers the raw reality of injustice, greed, and racism in our present time and space. Shad’s sixth studio album stands out as collage of expressionism, a mixed-media of sorts. One can appreciate the various influences in sound and production; immediately I hear Oddisee, DECA, Mos Def and The Roots. Shad shrouds the feels of slam poetry in a jazz cafe with rally cries through a megaphone. Working with Canadian artists such as Montreal DJ Kaytranada, Toronto Rapper Ian Kamau, Ottawa Rapper Eternia, and BC group Yukon Blonde (amongst others) the album explores the local sounds of multiple genres. “The Revolution / The Establishment” provided an interesting take on a few different voices from the different parties involved in modern war; from the creation of conflicts between government bodies to the “victimless” manufacturers of weapons of mass destruction. While most of the album discussed the depths of current / future wars; Shad also touched on our naive approach to gentrification, and how greed trumps our family values. The line in “Another Year” speaks perfectly to homelessness in Toronto – “We’re numb to the numbers of people sleeping under the stars…”. While this track seems to lose some weight with the rest of the narrative, the message is still a clear and powerful anthem from the local and the native. A Short Story About A War delivers in the most uncomfortable way, while difficult at times, it speaks an honest emotional truth.

Originally from NJ, Nicholas is an architect residing in Toronto. His most memorable moments in music: Crying during Roger Waters set at Newport Folk Festival, Nas performing all of Illmatic at Governors Ball, and Manchester Orchestra performing Cope in a church in New Haven, Connecticut.
RELATED ARTICLES
album reviewalbum reviewssecret city records
9.0