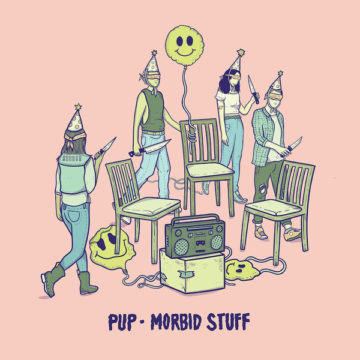 The scrappy Toronto punks have been busy in the three-year period since their last album was released, 2016’s The Dream Is Over. On top of working on new music, gigging through tour dates left and right, and self-publishing fanzines—PUP also started a record label called Little Dipper, which put out the band’s long-awaited and newly-released third album, Morbid Stuff.

The album is filled to the brim with the band’s patented pop-punk nihilism but with an added shot of anxiety-infused existentialism. Morbid Stuff—like the name suggests—touches on plenty of morbid topics throughout its 11 tracks and 36-minute runtime. Right from the get-go, the album’s title track “Morbid Stuff” features lyrics that are essentially a shopping list of dark thoughts that have run through vocalist Stefan Babcock’s mind. From that point on, everything from suffering through nervous breakdowns to apathy for day-to-day life, to obsessing over mortality and the restlessness of city living gets addressed on the record.

Morbid Stuff also proves to be PUP’s most experimental sounding album, straying away from the confines of simply being pop-punk. “Scorpion Hill” features an intro that sounds like it’s being sung over a campfire. While “Full Blown Meltdown” comes out of the gate swinging with aggressively heavy, driving riffs and pounding drums. Finally, things come to a screeching halt with the closer “City,” a slow-burning track that ends things on a quieter note compared to all the mayhem that comes before it.

But don’t fret, all the loud power chords, angsty hooks and sing-along gang vocals that PUP is known for are still there in bangers like “Kids,” “Free At Last,” and “Sibling Rivalry.”

With Morbid Stuff, PUP take a jab at all of life’s gruelling troubles in an effort to make some sense of it all and come out on the other side with a loud, energetic and volatile third album, showcasing the band’s best and darkest work.