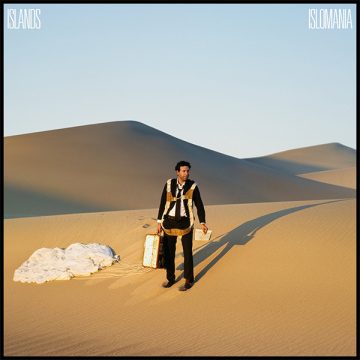 The definition of Islomania is to have an enthusiastic obsession with islands, where the mere thought of being on a little world surrounded by water has one quivering with excitement. It’s an odd kink, but whatever floats the boat.

Time apart can truly be the birth and renewal of new and wonderful things. Sometimes when you think that you’ve closed the chapter on a slice of life, life will remind you that there are a few more pages to be written. This was the case when Nick Thorburn decided to turn out the lights on his band Islands in 2016. After 10 years and seven albums, Thorburn felt it was time to focus on other things, and that he did, such as collaborating with a few other bands, scoring a movie, and even publishing a graphic novel. But still there was an easily remembered breeze that spoke to his heart as he crafted numerous songs in his kitchen studio. Intended for other projects, Thorburn realized that these songs actually were meant for a new Islands album, and so he got the members together and over a couple of years recording, Islomania was born.

The album is loose, light-hearted, and free of constraints. It feels very unhurried and living on island time. “(We Like To) Do It With the Lights On” is such a bubbly and fun reminder of the sweeter moments in life and it just feels good resonating in my head-case. “Never Let You Down”, while upbeat, carries a bit of a moodier edge with lyrics like, “I was wrong to darken your door, do I belong in these open arms anymore.”

Islomania is such cool, laid-back album recorded over an ample amount of time, yet there’s an urgency to it that seems as though the band were chomping at the bit to get this music out, and what I find truly lovely is that it’s a perfect follow-up album for old fans yet it could easily rope in new fans as well with its super catchy swooning pop sensibilities.

It took the recommendation of a best friend to get me into the pages of music magazine writing. Armed with the deepest appreciation for all the music, a ridiculous sense of humour, and the apparent ability to string a few words together, these fingers started giving. Who knew it would become one of my favourite things many years later and that I'd enjoy seeing my works published the world over?!
RELATED ARTICLES
album reviewalbum reviewsislands
8.0