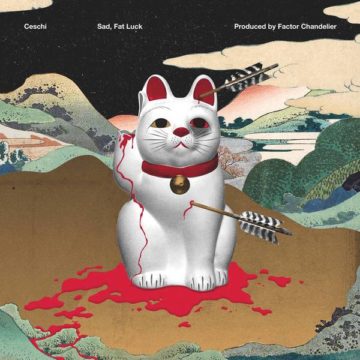 This month brings us Sad, Fat Luck.  This is Ceschi’s 5th solo album. The Connecticut-born rapper was praised in his home town for being one of the most influential hip-hop artists in his area and has most recently left us with this 13-track LP.

The upbeat album takes on many themes including God, life, and the sometimes stark realities of today’s world that we live in. If you listen to “Jobs” Ceschi explicitly vocalizes his dislike for the capitalist world around him behind a deep flowing beat describing capitalism like a virus in society.

The features on this album go a long way, we see Sammus and Astronautalis on tracks #9 and #11 respectively. Both American rappers give a great uplift to the songs they are credited on, I just wish we could have maybe seen a couple more artists on the album.

Overall this is a great album, the production is better than most and I like to hear the indie rock/rap style Ceschi puts out for us. If you’re looking to get away from the usual rap we sometimes hear check Ceschi out for a softer sound.

The Spill Magazine is a Toronto-based online publication dedicated to covering the independent music scene with a strong focus on our thriving hometown talent. Our writers bring you up-to-date news, in-depth features on musicians and reviews for the latest CD releases. We also travel to the front lines for all local festivals including Canadian Music Week and North by Northeast. Don’t forget to check out our Facebook and Twitter pages for all daily Spill updates.
RELATED ARTICLES
album reviewalbum reviewsfake four inc.
8.0