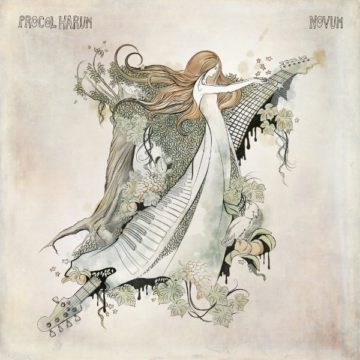 This is Procol Harum’s first studio album since 2003 The Well’s On Fire, and their 12th studio album to date.  Since their debut album in 1967 (the brilliant album  Procol Harum) the band has been through many member changes.  This current version of the band features founding member Gary Brooker and only two others who were part of the band in 2003 (Mike Pegg on bass, and Geoff Whitehorn on guitar).  Really, this album amounts to a solo album by Brooker, but he is smart enough to know that Procol Harum’s name carries much more weight than his own as a solo album.

The other big change since 2003 is the departure of lyricist Keith Reid.  This is the first studio album without him, and his absence is felt.  The lyrics here are mostly handled by Pete Brown (best known for his work with Cream and Jack Bruce), and for the most part fit the music.  But as good as they are in places, Reid is missed.

All that said, Novum is  still a great album.  Brooker’s voice is in fine form, and to my ears he has a ‘Dorian Gray’  thing going for his vocals.  He does not seem to age.  His playing, along with the rest of the band is near perfect and the overall effect of the album is pure enjoyment.

The name  Novum comes from Science Fiction writer/scholar to describe scientifically plausible things used in science fiction writing.  But the word translate in Latin to mean ‘new thing’.  I think this is the definition the band is going for with this album title.

For here, Procol Harum presents new music and the band itself is ‘a new thing’.  The music ranges from straight ahead rock and roll to almost prog/semi classical writing, which is what one has come to expect from Brooker and company.

Going back to the lyrics, for many of the songs, the lyrics tell some stories.  Some dark, “Last Chance Motel”) and some funny, “Neighbour”.  But where Brown shines is in the song “Sunday Morning”, taking a working person’s perspective and doing a brilliant job.  “Always hope the weekend never ends, Work keeps stealing my best days.”  Brooker sings in “Sunday Morning”, surrounded by almost classical music.  Inspirational at times.

The album ends with the heartbreaking, and beautiful “Somewhen”, which, had it been released 40 years ago, would be a standard by now.  Here Brooker shows his lyrical ability and  shines with the lyrics which match his beautiful voice and playing (his piano playing in this one is stunning).  SImply produced, and perhaps one of the most powerful moments on the album.  Perhaps he should take more of a role with the lyrics in the future.

This is a very accomplished work.  An album that deserves attention and deserves to be heard.  Over the years Procol Harum have produced some incredible albums.  This is another one.  It may not be breaking new ground, but who cares.  Brooker is here, and still producing incredible music with very professional players.  Well worth a listen.

Born and raised in Whitby, Aaron discovered music through his love of The Beatles. This led to a career in radio, writing for various publications, and ultimately a radio show about The Beatles (Beatles Universe), which ran for over four years. When not immersed in music, Aaron enjoys spending time with the loves of his life -- his wife Andrea, and daughters Emily and Linda (all of whom have an intense love of music too).
RELATED ARTICLES
album reviewsprocol harumsunday morning
8.0