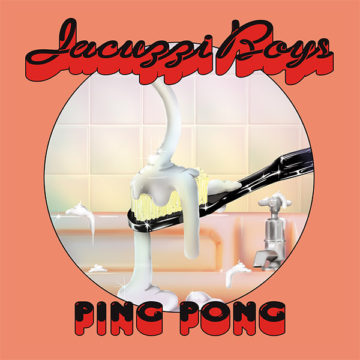 If their previous album was an experiment in sound, then Ping Pong, the latest release from Miami rockers Jacuzzi Boys, is the realization of it.

Produced by the band and released on their brand new label, Mag Mag, Ping Pong sees the band moving further away from their early garage rock roots and playing with new sounds, pulling them into the world of pop synths, sparkling psychedelic guitars, and a squeaky clean finish – and it almost works.

Opening the album with screeching feedback, crunchy guitars, and layered, dreamy vocals, the band promises big things very early on and is almost instantly catching, but keeping that momentum throughout is where the record starts to crack.

By track two, Boys Like Blood, the album settles into its course – that is, a collection of one goofy and poppy track after another. There’s nothing inherently bad about any of the songs, but there’s nothing that really stands out either. If you’re not careful, you could find yourself on the twelfth and final track without even realizing, never really taking note of anything at all.

Jacuzzi Boys make fun records, maybe even pretty good records, but they seem to struggle with making standout records. And while Ping Pong might be their best effort yet, the band hasn’t quite been able to break the garage pop mould that they’ve placed themselves in.

Jacqueline Tucci is a journalist in Toronto. She’s new to Spill, but has been interviewing bands and writing about music since she was a teenager. You can almost always find her on the web, in record stores, or in bars looking for new and exciting local music.
RELATED ARTICLES
album reviews
9.0