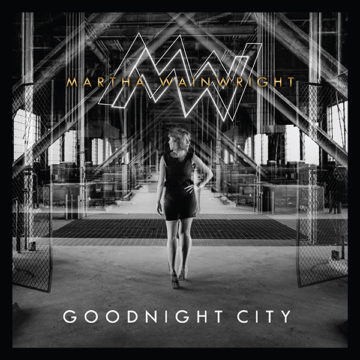 It might seem difficult trying to live up to household folk names like Loudon and Rufus, but in her sixth studio album, Martha Wainwright has successfully rounded out her sound and showed the world what she can do. Produced by her husband, Brad Albetta, and climbing the Canadian Billboard Charts, Goodnight City, has successfully caused a stir for the 40-year-old folk rock singer.

Wainwright, like her father and brother, is a storyteller and thus, brings out her true singer-songwriter self. The album is full of confessions, thoughts, struggles and real-world ups and downs; each of which seems to have its own natural agenda. Martha and Brad did a great job of making this record feel very real by staying clear of over producing it. Descriptions of her life as both mother and wife allow for the album to twist and turn and with it, Wainwright, adjusts vocally as she might do to take different tones with her husband, her son, her friends or her family. She weaves from a weep so low its almost a whisper to an operatic roar so big its almost a cabaret show. She is so fantastically herself and shows that she (and many woman) have to take on many roles – being at once extravagant and elegant, playful and serious.

Wainwright is bizarre is a wonderful way. She provides poetry like Bob Dylan, and sings with the croon of Elena Tonra (Daughter) and the soul of Bonnie Raitt. “Franci” is an ode to her son, portrayed with its child-like formula. Wainwright’s playful grand piano and vocals give it an uplifting school-house bounce. “Look Into My Eyes” is a mythical adventure that gallops along nicely. She spans different scenes, switching from French to English and her melodic vocals pair beautifully with the moody saxophone and hurried piano line. “So Down” releases a taste of her punk influence in a new-wavey sound. Martha seems to cry out and wail at her own self. She depicts a dream or memory that she isn’t quite sure is reality or fantasy.

Martha only wrote half of the songs on the album. the others, she states are collaborations with individuals close to her. Those tracks relish in their junxtaposition, taking a handful of ideas and sounds that shouldn’t really work together – and sometimes they don’t. Goodnight City leaves us with a few let downs where the wondrous songwriting doesn’t seem to shine a positive light. “Take The Reigns,” is a confusing mellow, lo-fi folk tune that doesn’t seem to quite get anywhere. “Alexandria”, and its stormy atmosphere, also seems to to stir to the point right before a climax but never quite reach it. Even Wainwright’s pleasantly unconventional vocals can’t seem to tie this one into something cohesive. Finally, I’m just not sure what to make of or do with “Francis”, the album’s closer and a song co-written with her brother, Rufus. Brad and Martha, clearly didn’t want to go by the book. They wanted to be unique. They wanted to make a record that said only what they wished to say. Even with this record’s floating demeanor, it is definitely her most polished work yet. It’s uplifting, powerful, diverse and shines with almost over-the-top charisma that finally gives her a sound that seems to be her own.

After majoring in business & entrepreneurship at UCSB and traveling the world, Andrew moved to Los Angeles to pursue music and not give up his love for surfing, hiking and yoga. He is also in a couple really cool, up and coming, indie-rock bands in LA - Mothlight & Lone Kodiak.
RELATED ARTICLES
album reviewscadence music groupgoodnight city
8.0