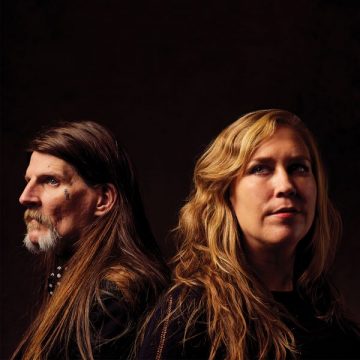 Fallibility, on the other hand, is an inalienable (though acceptable) reality of life, especially when it comes to creative inspiration and originality. However, it is one thing to be fallible and it is another to release a work whose inspiration and sincerity seem lacking.

It is far from my place to be able to assess whether or not this is what happened with Full Upon Her Burning Lips. At the same time, it seems difficult to attribute the nature of this work to any other origin. Clumsy melodies, an apathetic expression across most instrumental sections and a lack of atmospheric movement define the LP which comes across much like an unreleased demo album that’s been remastered.

If not for the artistic and creative excellence that marked their recent collaboration with The Bug on 2017’s Concrete Desert, it might seem to be a record released by an artist that’s lost their passion for their work. Yet, the album itself reveals that this may not be the case on ‘Maiden’s Catafalque’ where the ubiquitous fuzzy tone that defined the record until that point across repetitive and unimaginative melodies is subsumed by a smoother textural landscape that allows for a thus far unexperienced emotional contact with the artist.

Perhaps there are other reasons for this album being the way it is. My own perception could be at fault as well. Unfortunately, however, listening to Full Upon Her Burning Lips is hardly an experience I could sincerely recommend.

Based in Montreal but raised across Western Europe, Andrew feels at home both everywhere and nowhere. Having picked up the piano at age four, he has since gone on to add clarinet, saxophone and guitar to his musical arsenal. As well as crafting music, Andrew spends a lot of time listening both at home and in live contexts. Rather than focusing on a particular style or calibre of artist, he is keen to explore music of any shape or size. Outside music, Andrew's passions lie in philosophical writing, visual art and sharing positivity with the world around him.
RELATED ARTICLES
album reviewalbum reviewsearth
8.0