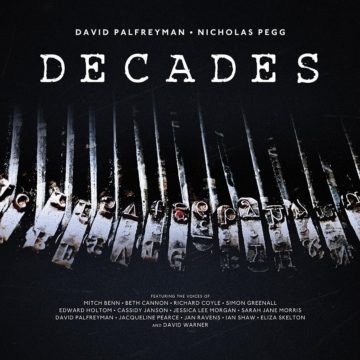 David Palfreyman (Malf) and Nicholas Pegg have produced an album in 2017, which is remarkably brave and certainly brilliant. They have written and with the help of many talented artists, produced a concept album/rock opera. The album is called Decades, and it is one of the most unique albums of the year. This is a genre of music that has been missing from the rock landscape for the last few years and in this time of downloading just tracks and not really listening to complete albums, this is an incredible move for these two original and talented artists.

Upon my first listen of Decades, I was reminded of the classic album by Jeff Wayne, Jeff Wayne’s Musical Version of The War of The Worlds. Not so much because of the style of music, but because of the spoken word pieces that were inserted between the songs, and on this album this is used brilliantly. In fact, the album is split between ‘The Cast’ and ‘Musicians’.

One of the lead roles from the cast is David Warner (The Omen, Time Bandits), who plays the lead character looking back on his life. The story is punctuated by music and other actors playing the same character as a younger man. Warner has an incredible voice and Palfreyman and Pegg use this great actor’s talents to great effect. He brings to mind Burton’s performance on Jeff Wayne’s album. But on this album, Warner drives the story and basically sets everything up. It really is quite a talent, as are the written words. Further, the production is brilliant, sound effects and music weaving in and out. Pegg and Palfreyman know how to tell a story. Other members include Richard Coyle (Coupling), Jacqueline Pearce (Plague of the Zombies), Jan Ravens (Splitting Image), Edward Holtom (Sherlock) and Simon Greenall (Trapped!).

The music itself is difficult to categorize. It is really all over the map and that is a good thing. They don’t rely on rock or prog-rock to tell this story. I was worried that this would sound like a Trans Siberian Orchestra album, but was pleasantly surprised. This is reflected in the artists featured on this album. Jessica Lee Morgan turns in a some fantastic performances.  Her voice is expressive and beautiful. Listen to her performance on “Hurting, Sinking”. David Palfreyman takes a turn at the microphone for several songs, and fans of this talented individual will not be disappointed. To my ears, some of his best singing he has released.  His performance on “Some People Get All The Breaks” is another clear highlight and a potential single.

Other musicians/artists featured include Sarah Jane Morris, Cassidy Janson, Beth Cannon, Ian Shaw, Mitch Benn and Eliza Skelton. All of whom turn in fantastic performances. Credit must also be given to the musicians featured on the album.  Again, Palfreyman provides some nice guitar work but it is Gary Barnacle who runs away with the album with his flute and saxophone playing.  He has been around for years, and when I listened to the album I could pick out his playing.  It is nice to hear him again.  Again, Pegg and Palfreyman know who they are working with and use the musicians to achieve the sound they hear in their heads.

This is an epic album, something I don’t get to say often.  It is a brilliant double album that needs to be a double album. This style of writing is a lost art and this is a welcome return to a musical extravaganza. It is like listening to an old radio show, where the story slowly unfolds using sound and it is done extremely well. t is also very original. When listening to this album, I kept thinking, this would make a great movie then I caught myself. The visuals were in my head and the album is a perfect stand alone project. Well done Mr. Palfreyman and Mr. Pegg. This is quite an accomplishment and forgive my selfishness, but I hope there is a follow up soon.

Born and raised in Whitby, Aaron discovered music through his love of The Beatles. This led to a career in radio, writing for various publications, and ultimately a radio show about The Beatles (Beatles Universe), which ran for over four years. When not immersed in music, Aaron enjoys spending time with the loves of his life -- his wife Andrea, and daughters Emily and Linda (all of whom have an intense love of music too).
RELATED ARTICLES
album reviewsdavid palfreymandecades
8.0