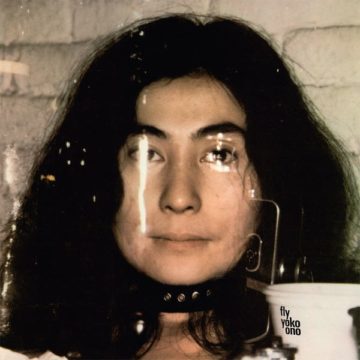 This release is part of phase two of The Yoko Ono Reissue Project, a joint release project between Secretly Canadian and Chimera Records. Phase one included albums that were more or less joint projects with John Lennon (Unfinished Music No.1 – Two Virgins; Unfinished Music No. 2 – Life With The Lions; Yoko Ono/Plastic Ono Band) were released November 11, 2016. As with those albums, phase two reissues are available in a variety of formats (vinyl, white vinyl, CD and streaming) and each comes with bonus tracks.

Fly is another joint project with Lennon. He co-produced the album and plays various instruments and provides backing vocals throughout the album. This album was originally released 11 days after Lennon released his classic album Imagine. Fly is very much a companion album to Imagine. Not so much in melod, y but in terms of overall feeling and themes. Most of the album was recorded while Lennon was working on Imagine. When released in 1971, the album was issued on Apple Records and has not been available on vinyl since. It was reissued in 1997 on Rykodisc with bonus tracks available on this release.

When the album was released, it was not without controversy. One song, “Hirake”, had been banned in the U.S. It was originally released under the title “Open Your Box” as the B-side to Lennon’s “Power To The People”. In America and Canada, that track was dropped in favour of a song from her Plastic Ono Band album “Touch Me”. The song, albeit with a different title, was finally released in the U.S., but not before Ono changed some of the words. Today, it seems silly, but in 1971 it raised a great many eyebrows.

Fly is a complex album. There is a combination of more traditional ballad songs, “Mrs. Lennon” and straight ahead rock songs “Midsummer New York”. But there is also Yoko’s own brand of music, complete with feedback and her trademark vocals. “Fly”, the soundtrack from the film of the same name. Now, I know her style and voice is not for everyone. However, I am a fan and have always felt that if people took the time to listen, they might be very surprised how intelligent and brilliant her music is.

Fly is a double album, and for that reason Ono is able to experiment and branch out throughout the album. Listen to one of her more experimental songs, “Don’t Count The Waves”, which is an intriguing combination of dub style with electronic sounds.  Brilliant and about 30 years ahead of her time. Check out “Mindtrain”, a sixteen minute jam featuring some incredible slide playing from Lennon. It is a brilliant piece that leaves you breathless. Interestingly, this song was cut down as a single for the European/U.K. market and later remixed as a 12 inch dance single. It is a brilliant song.

As for the bonus tracks (if you buy the vinyl, the bonus tracks are included with the download code), they  are worth the price of admission alone and it confuses me as to why we have waited so long to hear these masterpieces. “The Path” is industrial electronica, at its finest and “Head Play” is a medley of “You”, “Airmale” and “Fly”. It is astounding to hear what they did with this piece. Frantic and stunning.

For the pop fans, “Mrs. Lennon” is proof that Ono can write, and produce standard pop ballads, but even then, she throws in her own curves which makes the song that more interesting and enjoyable.  “Will You Touch Me” is a lovely little song. It remained unreleased by Ono until her 1981 album Season of Glass, where she remade the song, more as a tribute and a song about loss.

This album is not for all tastes, but the more adventurous will derive something from it.  Secretly Canadian and Chimera has done an excellent job with the reissue, complete with the lyrics and poster that came with the original release.. In 1971 Fly came with a card to order Ono’s book, Grapefruit (Grapefruit is also the label of the record). A nice booklet is also included. A great deal of care was taken with this reissue and this is an album that deserves such care.

Fly is a work of art, and like all works of art not appreciated or understood by everyone. That does not matter, it is a work of art and I, for one am glad it is back in the world. Her themes of loneliness, world peace, understanding and pain are universal and perhaps more relevant today than 46 years ago.

Born and raised in Whitby, Aaron discovered music through his love of The Beatles. This led to a career in radio, writing for various publications, and ultimately a radio show about The Beatles (Beatles Universe), which ran for over four years. When not immersed in music, Aaron enjoys spending time with the loves of his life -- his wife Andrea, and daughters Emily and Linda (all of whom have an intense love of music too).
RELATED ARTICLES
album reviewsflysecretly canadian
8.0