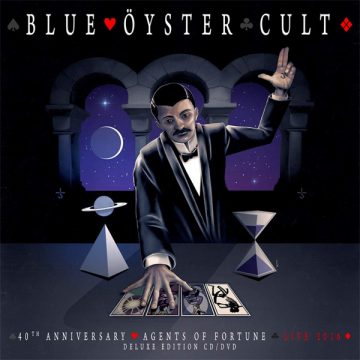 Recorded on Monday, April 18, 2016 for the Audience Music Network at Red Studios in Hollywood, Blue Oyster Cult took a turn at performing their classic and most popular album for an intimate audience. 40th Anniversary – Agents Of Fortune – Live 2016  is a wonderful souvenir of a special concert.

This year has been a great one for Blue Oyster Cult fans. Frontiers Music continue with  their  Blue Oyster Cult roll out with this never before released concert. The classic lineup is gone, and Eric Bloom (guitar, keyboards, vocals) and Donald “Buck Dharma” Roeser (guitar, vocals) are assisted by the 2016 one, which includes Richie Castellano (guitar, keyboards, vocals), Jules Radino (drums, percussion) and Kasim Sulton (bass, vocals). Special guest artist, original member, Albert Bouchard, provides guitar, percussion and vocals. All in all the band is able to replicate the original album.

Agents Of Fortune is Blue Oyster Cult’s biggest album, thanks mainly to the hit single “(Don’t Fear) The Reaper”, but as fans will tell you, there is much more to the album. “This Ain’t The Summer Of Love” and “Sinful Love” may not have charted as singles but they were both FM radio standards and are terrific songs. The album is very strong, full of melodies with a very heavy metal sound. As a result, a 40th anniversary performance made perfect sense.

This concert has been well-recorded and is quite enjoyable. It may have you reaching for the original studio album, but as far as live albums go, this is a faithful rendition of the classic one. Roeser, at the time, still had the pipes and the ability to pull off the songs. The band is tight and they get it right. What more can one ask?

As with all of Frontiers Music releases, this is a beautifully packaged CD/DVD. Great care has been taken in putting this together. The DVD is high quality and is basically the concert. While this will win the band new fans and it certainly does not replace the original album, it is however a great deal of fun to hear them perform the album live. As well, this serves as a historic document of a band who continues to please its loyal following.