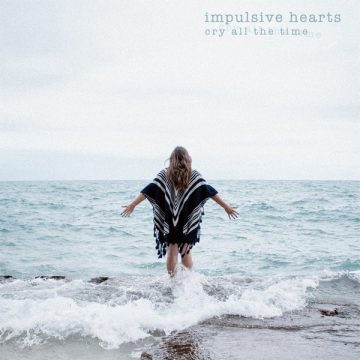 Hailing out of Chicago, Illinois, Impulsive Hearts have released their second LP, Cry All the Time, a 10-track collection of beach-bubble ice-cream-sunset garage rock (new genre!) that is catchy and energetic yet reflective and forlorn at the same time.

Lead by the impressive vocals of Danielle Sines, the comparisons some have made to The Pretenders are evident immediately upon hearing her sing on the opening track “MELODY”. The way she woos and pops her way through the lyrics in “CAN I ASK U”, doing tricks on the words, using her enunciation to break them up and stretch them out, gives order to the steady-pumping drums and plucky bass and guitar washes that surround her from song-to-song. The use of horns and violin are subtle touches here, too, but they add a dimension to the band’s overall sound that distinguishes them in a good way from the other bands they are often compared to. While many of the comparisons are apt for one reason or another, Impulsive Hearts has their own thing going, too.

While much of the album is firmly in the beach-bubble garage rock mode, some tracks (for instance, all of the lower-cased song titles on the album, which are otherwise ALL CAPITALS) are much more in the ice-cream-sunset mode, which is much more reflective and wistful, a mode in which Sines’ voice—such as in “Telephone Girl”—is put front-and-center over a piano and held organ, and you can practically feel the melted ice cream running onto your hands. “Boxing Day”, another of the lower-cased few, is similarly subdued relative to much of the album, and is the closest track here to something country-sounding. This, along with “ALIEN” are two standouts among many on a strong second album.

Sines has admitted to favoring melodies that remind her of summertime, and while this album is warm and hazy and the opening tracks contain the energy of a youthful summer day, by the end, with tracks like “CRY” and “Some Heartbreakers” closing things out, it sounds as if the shadows have grown too long over everything to ignore and pretty soon the streetlights will be coming on. Overall, if these are songs meant to evoke summertime, they evoke the end of it, but in the most upbeat possible way.

Dan Kennard is an English teacher and fiction writer living outside Kansas City, Kansas where he lives with his wife and children. More about his work can be found at amazon.com/author/dankennard. You can also follow him on Twitter and Instagram @kennardistry or contact him at kennardistry@gmail.com.
RELATED ARTICLES
album reviewalbum reviewsmidwest action
8.0