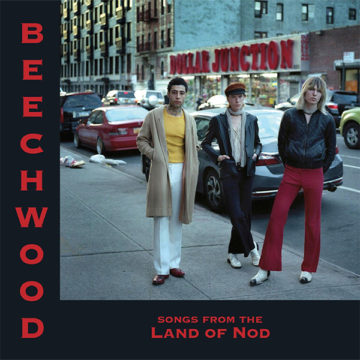 Beechwood
Songs From The Land Of Nod
Alive Records

With the nostalgic sting of 90’s glam punk and a hint of new age alt rock, Beechwood’s latest album Songs from the Land of Nod packs a great punch with its 10-track release. The trio of self-proclaimed delinquents hail from the city streets of New York, and the authenticity of their sophomore album just goes to show that true punk is not dead.

With Gordon Lawrence shredding simple yet strident riffs, especially in “I don’t wanna be the one you love”, and serenading poetic lyrics with his signature vocals in “C/F” it’s an album full of both surface head bangers and thoughtful melodies.

The raw back-to-basics sound of “I’m not like everybody else,” is thrown in your face, in the best way possible, and forces a vibe renascent of dive bars on shifty streets.

Isa Tineo brings the punchy beat alive with his true to style drumming through-out the album, carrying percussion-soaked songs such as “Melting Over You”. He also gives a taste of his pure vocals and writing chops in “Heroin Honey” and “All for Naught”, with the rest of the album written and sung by Lawrence. Sid Simons holds down the slower, more melodious tunes with his bass skills, being almost playful at times, but always finely calibrated.

From start to finish, Songs of the Land of Nod pulls you in with their ability to truly give punk gods a run for their money and keeps you interested with their unique additions of melodic rhythms and heartfelt lyrics.

An almost Jimi Hendrix style riff in “Pulling Through” pays homage to rock and roll at its finest, bringing classic realness to the forefront of today’s music scene.

The variance of Songs from the Land of Nod tweak old-school style in a new school way, creating a vibe that sounds like an Elliot Smith/The Stooges love child.

Beechwood will be hitting the stage at The Rivoli in Toronto with Bush Tetras and Left by Snakes on May 19, 2018.

Here's what we think...
Spill Rating
Fan Rating
Rate Here
New Criteria
10
9.9
8.0
Total Spill Rating
9.9
Total Fan Rating
5 ratings
You have rated this
Album Reviews
ain't gonna last all nightalbum reviewsalive recordsbeechwoodheroin honeyi’m not like everybody elsepulling throughsongs from the land of nod
ain't gonna last all night, album reviews, alive records, beechwood, heroin honey, i’m not like everybody else, pulling through, songs from the land of nod
About the Author
Angelica Bottaro

Angelica is a Freelance Writer based in Toronto, ON. Her passion for music started at a young age when she received a guitar for her birthday, and it has taken over her life in the best possible way ever since. When she’s not searching for additions to her vinyl collection, discovering new upcoming bands on Spotify, or attending any live show she can get tickets to, she can be found in her room jamming on her guitar.
RELATED ARTICLES
album reviewsalive records
8.0