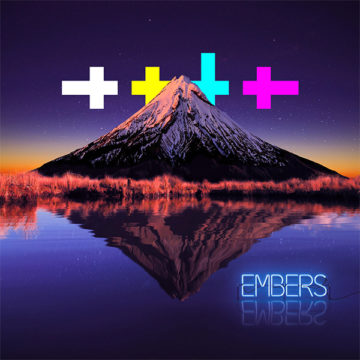 Brooklyn-based producer Mark Roberts returns with a record that captures a wide spectrum of human emotions under the veil of tightly-constructed electronic synth pop that refuses to stay in one place. Over the span of 11 tracks, Embers sees Mark Roberts successfully attempt the reimagining of a genre that over the course of five years has leaned on a tired and formulaic approach. On Embers the Brooklyn-based producer manages to stay above water, with one of the most ambitious electronic records to come out in years.

It would be an injustice to the album to strictly call Embers an electronic record, however, as the album experiments with various genres, from dream-pop to post-rock to electro, to bring its ambitions to life. On album highlight “Candy,” Mark Roberts slips into his best-fitting Morrissey pants, with a moody ’80s-inspired new-wave track that pulsates its way to an angelic, synth-heavy chorus while Roberts contemplates his internal daily struggles and his saving grace all at once. The track “Winter” wastes no time finding its footing, with an industrial heavy beat that beautifully captures the bitterness of winter right through to the track’s climactic and cinematic conclusion.

Though the album is successful in its attempts to cross many genres to create a refreshing electronic record, it’s on the second album highlight “Echoes” where Mark Roberts’ ambitions and expectations truly come to life. The track starts off with a Middle-Eastern-inspired instrumental loop that seamlessly weaves its way through a menacing beat, and a beautifully frightening melody that is layered with lyrics that conjure up feelings of separation anxiety and the internal struggles with one’s own religious identity; a common theme found throughout the album.

The album neatly wraps itself up with the uplifting and highly-anthemic track “Heaven” that acts as a counterbalance to the bleakness found in Roberts’ lyrics by providing the euphoric qualities that make electronic music great in the first place. It’s evident throughout the album that Mark Roberts, from the very beginning, set out to make a record that would force a change in the current perception of electronic-based music, and with Embers he finds himself successfully pulling it off.

Carlos Cajina is a documentary photographer and writer based out of Toronto. With a passion for storytelling, his love of photography is equally matched by his passion for music. At night, he moonlights as a freelance writer and music journalist, covering the latest in local and independent music culture for various blogs and outlets.
RELATED ARTICLES
album reviewsanimalsbrooklyn
8.0