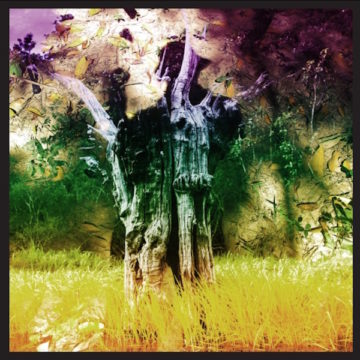 Animal Collective have been around for over 15 years, and the core members of this band are Avey Tare (David Portner); Panda Bear (Noah Lennox); Deakin’ (Josh Dibb); and Geologist (Brian Weitz).  Over the past 17 years they have released ten albums, and nine EPs. Meeting of the Waters  is their first release to feature only Avey Tare and Geologist.  This is not all that odd, as over the years their albums feature different configurations of the band.  It is important that fans do not read into this EP’s line-up as a sign of the band splintering apart.  It is just the Animal Collective way.  Also worth note, this EP was released for Record Store Day, as a limited edition.  Again, nothing new for this band.

This EP was recorded in 2016 in the Amazon, live on location.  So unique was this recording that a documentary was filmed for Viceland.  Recording in the rainforest  means there are a number of found noises finding their way into the songs.

Most EPs are short, to the point and serves almost as an extended single.  This is not the case with this EP.  Meeting of the Waters is a bold artistic statement.  Not the most accessible, perhaps, but this is an incredible release.  The noises of the Amazon are mixed in rhythmically and this produces an (un)earthly listening experience.  At times frightening, and at times inspirational, but never ever boring.

Tare and Geologist know how to manipulate sound, and in combination with their minimalistic playing and singing, the impact on the listener is astounding.  They have consistently carved out their own sound and own way of doing things, and this EP is no different, perhaps even their most adventurous yet. This is not full of traditional forms of music, nor do they attempt to sound like a band from Brazil.  The music is minimalistic and not always the most melodic, but it is emotional and it does creep under your skin and stays there.  I found myself repeating the record over and over as I listened to it.  I know there is still things in this EP I am missing, perhaps in a year from now I can rewrite this with an even deeper understanding of this record.

The lyrics are sparse and not necessarily ecologically charged, but dig deep and their worry about the state of the earth is there.  It is important to note that some of the money from the sales of this EP will go to benefit Idesam, a non government organization that is working towards the conservation and sustainable development of the Amazon region.

Fans of the band will have an idea of what to expect.  Animal Collective are about sound, not structured songs.  But the adventurous will enjoy this 30 minutes.

Born and raised in Whitby, Aaron discovered music through his love of The Beatles. This led to a career in radio, writing for various publications, and ultimately a radio show about The Beatles (Beatles Universe), which ran for over four years. When not immersed in music, Aaron enjoys spending time with the loves of his life -- his wife Andrea, and daughters Emily and Linda (all of whom have an intense love of music too).
RELATED ARTICLES
album reviewsanimal collectivedomino records
9.0