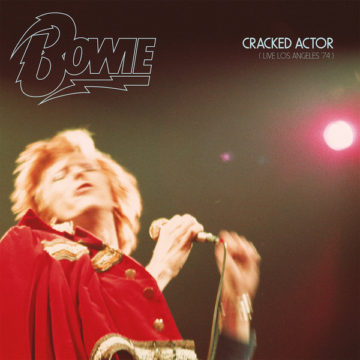 On April 22, 2017, I was up very early to get in line at Dead Dog Records to try and get the new limited edition releases for Record Store Day.  Among my purchases, I got my copy of David Bowie’s Cracked Actor (Live in Los Angeles ‘74).  A limited edition pressing (17,000 worldwide) and only available as a five sided, three record set (the sixth side is etched).  The other Bowie release was the much more limited edition called Bowpromo, a reissue of a promo record originally released in 1971.

David Bowie released Diamond Dogs (RCA) on May 24, 1974, and kicked off the Diamond Dogs Tour in Montreal on June 14, 1974 to promote that album.   The album was recorded in Los Angeles on September 5, 1974.  This is also the second live album to be issued from this tour.  The first live album, David Stage, was recorded over two dates, July 14th and 15th in Philadelphia.  However that live album required studio overdubs, and the original issue left out songs, and changed the order of the tracks.  Although well received at the time, it has gone through several revisions over the past 43 years since its release to get it right.

With Cracked Actor, they got it right the first time around.  This is a far superior album to David Live both musically and as an album.  David Bowie is credited as producer, which indicates he was working on this album long before it was issued.  It was mixed by long time Bowie producer and collaborator, Tony Visconti and he did a beautiful job bringing this music alive.   Great care was taken for the packaging, featuring seldom and never before seen pictures from that show.  It is a beautiful set.

The album sounds amazing.  It is hard to believe that Visconti was working with 42 year old tapes and yet it brings everything to life.  He manages to make it sound current, vibrant and exciting.  I would say it is probably the best sounding Bowie live album in his catalog.  It is a pity it has taken so long to be released.  For the record, this show has popped up over the years as a bootleg, the best release being A Portrait in Flesh.

There are differences with this show (which was the second leg of the tour) and the David Live release, taken from the first leg.  Luther Vandross and Robin Clark are two new additional background vocalists,  Doug Raunch replaces bassist Herbie Flowers and Greg Errico replaces Tony Newman on drums.  Michael Kamen dropped out of the tour at this point as Bowie was moving toward his “soul” stage.  But the result is a much tighter and enthusiastic band.  Their arrangements and versions of old and new (at the time) songs.

The songs are arranged differently.  “John, I’m Only Dancing”, introduced as his new single, and it is one heavy version.  The band plows through the song, leading to a dynamic ending.  “All The Young Dudes” is probably Bowie’s best version of the song.  “Space Oddity” has a brilliant arrangement and in this case is actually on par with the studio version.

By this stage of the tour, Bowie seems more engaged and has his second wind.  This album is an important document of an important tour for Bowie.  Not only was it to promote Diamond Dogs, for Bowie, it was a transition.  The glam rock from the previous three years was making way for his soul stage.   This album is an excellent document of how great Bowie could be live, which the other album from this tour failed to do.  My only complaint about the album is the limited nature.  It should be available for all fans to enjoy.

Born and raised in Whitby, Aaron discovered music through his love of The Beatles. This led to a career in radio, writing for various publications, and ultimately a radio show about The Beatles (Beatles Universe), which ran for over four years. When not immersed in music, Aaron enjoys spending time with the loves of his life -- his wife Andrea, and daughters Emily and Linda (all of whom have an intense love of music too).
RELATED ARTICLES
album reviewsall the young dudesdavid bowie
9.0