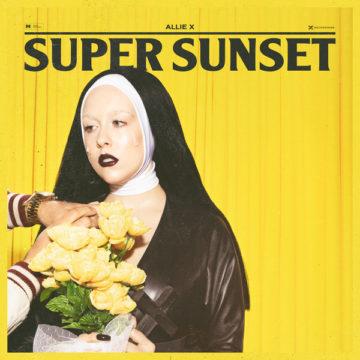 Allie X (Alexandra Ashley Hughes) is a singer/songwriter from the Toronto area who grew up with an interest in classical piano, opera and mujsical theatre, and later went on to release a number of independent album with a number of local bands. Moving to LA in 2013 and continuing her writing and recording career while meeting with various producers, she released, under her new adopted name of Allie X, the heavily charted single “Catch.” Now she has just released a smart, snappy EP titled Super Sunset that features six electro-pop tracks and two short musical interludes.

On Super Sunset Allie X reveals herself to be a smart and focused artist and singer/songwriter. Speaking of focused, “Focus” is the name of the final cut on Super Sunset, and is just one of many brilliant songs contained on the EP, and neatly sums up what this album’s all about. Other standouts include the first single and video “Not So Bad in LA,” “Science” and lastly, my personal favourite, the catchy and cheeky “Girl of the Year.”

With Super Sunset Allie X takes a giant step forward into being just that.

Gerry Young is President of Current Records and Management, and author of the 2011 biography Pop Goes The Weasel: Rock And Roll Off The Record, available at Indigo/Chapters, Barnes & Noble, and Amazon.com. He has recorded and managed Juno Award winning bands Martha And The Muffins and The Parachute Club among others.
RELATED ARTICLES
album reviewalbum reviewslittle things
7.0