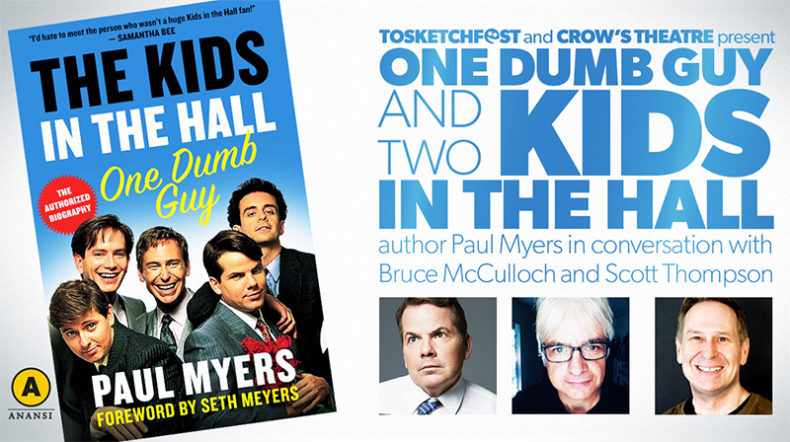 On a brisk October night in Toronto, the Toronto Sketch Comedy Festival/Crow’s Theatre was abuzz as Toronto-born, Berkeley, CA-based musician, journalist and author Paul Myers was in town to celebrate the release of his latest book. That work, The Kids In The Hall: One Dumb Guy, chronicles the inside story of the comedy troupe, from their 1980s start at The Rivoli on Toronto’s Queen Street West, to greater fame on television and film. Joining Myers for this event were two members of The Kids In The Hall, Bruce McCulloch and Scott Thompson.

As an author, Paul Myers is best known for writing about such figures in music as Barenaked Ladies, Long John Baldry, and Todd Rundgren. Being a self-described “comedy nerd”, and a former Second City improv workshop classmate of “Kids” Kevin McDonald and Dave Foley, Myers is eminently qualified for the subject matter.

Unlike many events of this type, this one began with a book signing (usually conducted at the end of the event). Myers, Thompson and McCulloch warmly greeted friends and fans, giving a wonderful feeling of community. By the time all were assembled in the theatre space, the audience was ready for the main event. Before things got underway, we were treated to a “Buddy” monologue. Scott Thompson brought back his beloved Buddy Cole character – the very gay bar-owner-name-dropping-socialite. Buddy was in fine form, giving his inimitable take on the realities of life in 2018 – mincing no words and taking no prisoners.

Into the conversation proper between these three men, there was much to discuss: nascent days in Toronto, auditioning for Lorne Michaels, working in New York during the 1980s AIDS crisis, aging and dealing with illness. McCulloch and Thompson provided the memories and the laughs. Myers kept things on an even keel as facilitator, though he got plenty of laughs himself, easily keeping up with these comedy veterans. 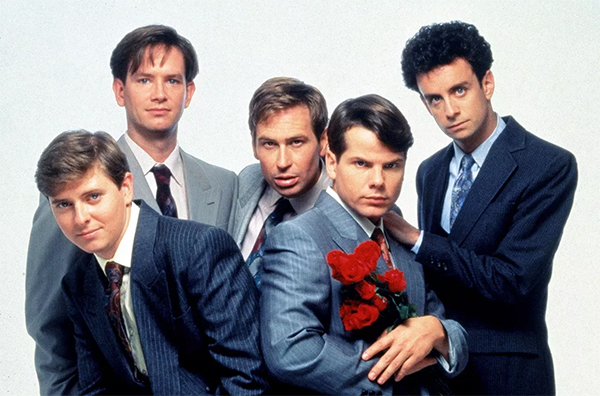 There were plenty of “old times” stories and reflections, such as McCulloch presuming that he could migrate an act from Calgary to Toronto and immediately achieve the same level of success in the big city. The audience also got a taste of some of The Kids In The Hall’s pivotal experiences, as they described how the troupe pulled themselves together and bonded by “beating up” a dressing room, between tapings of their television show pilot.

There were stories of bad timing and sadness, as Scott Thompson talked about his one-man show about terrorism which opened in New York the same week as 9/11, or the difficulty he encountered while writing and preparing “Death Comes To Town” during his illness with cancer. It was memories such as these, underscoring the fact that however they may disagree about comedy, the members of The Kids In The Hall are brothers, and they are there for each other.

Near the end of the evening, a special guest appeared. The Kids In The Hall writer/collaborator Paul Bellini emerged, standing still while wearing only a towel – hilariously reprising an absurd bit from their television show. As Scott Thompson noted, it was a nod to the bathhouses of Toronto.

The audience Q & A that followed was full of many thoughtful fan questions. The final question of the night spurred McCulloch, Thompson and Myers to ponder the notion of failure in their work, and its importance in creative pursuits. The unanimous response was, “Keep doing what you’re doing, even if it is not well received. You like it and you had fun doing/making it.” It was a philosophical ending to a hilarious evening of memories from a complicated comedy troupe that is at once thoughtful, sad, troubled, sick, and encouraging – kind of like life.

Bryan Williston has been involved in music since he was a young child. A veteran singer, songwriter, and music educator, Bryan has enjoyed playing a multitude of musical genres in a variety of outfits, over the years. Bryan lives in Whitby, Ontario.
RELATED ARTICLES
live reviewtoronto