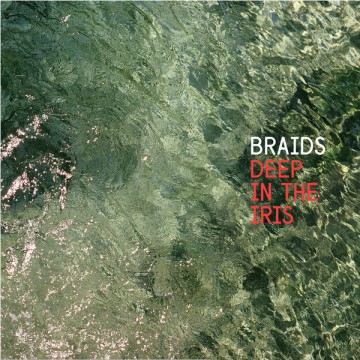 Let down your electronic braids! Originally from Alberta, the now Montreal-based trio of Raphaelle Standell, Austin Tufts and Taylor Smith continue to move the Braids brand forward with their third studio album Deep in the Iris (not to be confused with the low-budget porno, “Deep in the Irish”), coming in at a svelt 41:24 with nine pop / experimental rock tracks. Working with Bjork’s Damian Taylor to co-produce this release, one can glean some Bjork-esque art rock infusions throughout, which doesn’t lessen its listening pleasure. The album invites you to grab hold with “Letting Go,” a vitality filling, dreamy track that opens with a sombre keyboard (a theme of the album) and an interesting, complex drum beat with alluring, angelic vocals floating above the wall of sound. The organic keyboarding continues in the heartfelt “Taste,” as Standell kick starts a wonderful hook with introspective lyrics while the drum beat knows its place in the song and keeps to the background. Standell’s self-examining, enthralling, and ethereal vocals (influenced by listening to Joni Mitchell) takes centre stage on this release and should get the praise it fully deserves with songs like “Blondie,” “Sore Eyes,” “Happy When,” and the anthemic “Miniskirt.” A powerful and raw narrative is revealed through Braid’s intriguing lyrics with themes ranging from pornography (tongue in cheekily referenced earlier) to abuse, rape culture, and slut shaming. This album jars listeners to not only feel the music, but also to sagely interpret what is being said. In regard to instrumentation, having admitted drumming influences by Autechre and Aphex Twin abound throughout the albums, Tufts and Smith’s subdued piano and percussion arrangements sound breathless on each track with restrained and planned interplay. This symbiotic, skittering relationship creates a successful element on the album. The track “Blondie” comes to mind in regard to this symbiotic union as the trio has an interesting way of cutting the beat, à la drum and bass. The album’s dénouement, “Warm Like Summer,” intoxicates us with its polyphonic trove of instrumental / vocal textures. While departing from their monochromatic sophomore album Flourish // Perish, Braids gives you the sense that if it continues down this path with this existing pastiche of musical ideas, their finest hours have yet to be realized. With much depth and movement on each track arrangement while delivering cerebral, confessional lyrics that would cut your heart out, Braids contently maps out a delicate touch of experimentalism that leaves listeners enjoying the compelling dream pop journey, as they venture “Deep in the Iris.”

Insert pretentious stuff about me here. I was born at a very young age. I am pretty, funny... without the comma. Easily distracte
RELATED ARTICLES
album reviewsbraidsdeep in the iris
6.0