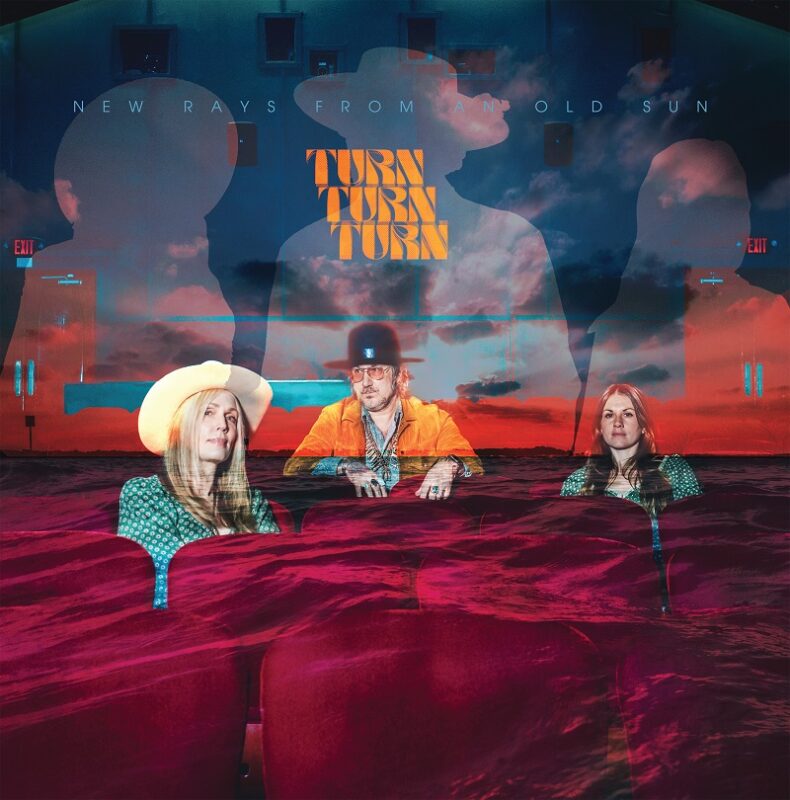 Buoyed by the positive reception of their 2020 debut album, Can’t Go Back, the Minneapolis/Eau Claire-based Americana trio, Turn Turn Turn, drew inspiration from the recent pandemic/political zeitgeist and penned more than two dozen songs in 2021. Half of the material made its way onto the band’s sophomore effort, New Rays From An Old Sun, which Turn Turn Turn will release on January 27th. The 11 songs on New Rays From An Old Sun were inspired by personal events, a desire for human connection, and the omnipresent news media showing a world teetering between chaos and transformation. Barb Brynstad (bass and vocals), Savannah Smith (guitar and vocals), and Adam Levy (guitars and vocals) tracked most of the new record at Levy’s apartment in St. Paul’s Schmidt Artists Lofts. The band also enlisted its core members, drummer Josh Kaplan and keyboardist Peter J. Sands, to lend their musical talents, resulting in a sonic mix that is multilayered and nuanced.

New Rays From An Old Sun showcases the band’s country, rock, and soul sensibilities, with more swagger, psychedelic flair, and rough edges than Can’t Go Back. The band also repeats the formula that endeared Can’t Go Back to fans and music critics: lush harmonies, unexpected chord changes, and miles of lithe, fuzzy guitar licks. Turn Turn Turn’s Laurel Canyon meets 70’s-Nashville-cosmic-soul vibe is layered with three-part harmonies that stitch the band’s musical tapestry together. Brynstad, Smith, and Levy have distinct voices, and the combination – a “fourth voice” – is greater than the sum of its parts. To create their sound, the band “turns” to the past of early American recorded music, “turns” again to the renaissance of the 1960s and 1970s, and finally “turns” to the present and toward the New Rays From An Old Sun.

“Dopamine Blues, it doesn’t feel great but we crave it. That little moment of release we get hearing from or seeing someone we’ve lost. I think this song resonates with so many people because we’ve all been there, we’ve felt that hurt, we’ve longed for the tiniest hint of connection.” ~Savannah Smith (rhythm guitarist, vocalist)