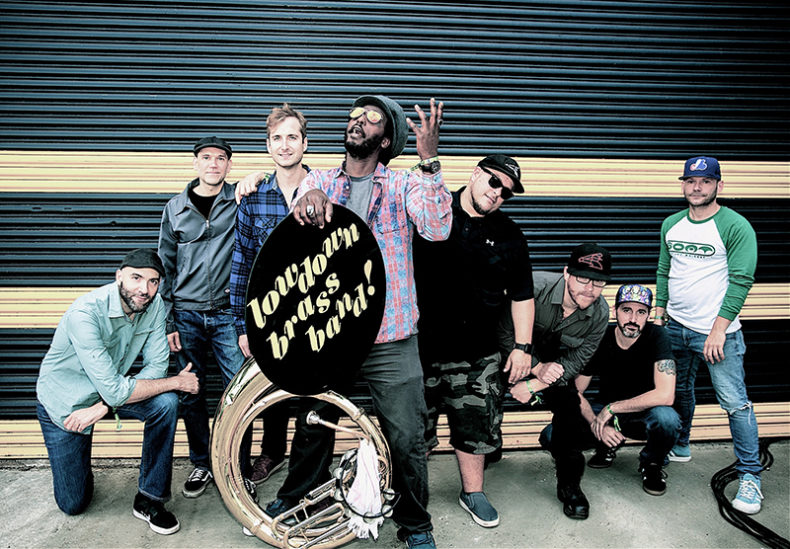 LOWDOWN BRASS BAND – “GRIND IT OUT”

This self-produced music series features LowDown in its purest form…live on stage, no edits, no apologies. Special guests and high energy performances highlight this unique musical offering. Featuring Chicago’s gritty Garfield Park neighborhood as a backdrop,  Episode 1 features “Grind It Out,” the new single from the new album LowDown Breaks (2018).

LowDown Brass Band (LDB) deftly synthesizes the gritty sounds of Chicago with the high energy second-line street beat of the Crescent City. LDB brandishes a powerful brass frontline of trumpets, trombones, saxophones, with a funky backline of drums and sousaphone. Combining the poetic ferocity of Billa Camp with stellar vocal harmonies, adventurous improvisation, movement, and grooves, LDB creates an infectious and diverse sound that has something for every listener.

Fresh off their appearance at The 2017 Chicago Jazz Festival, LowDown maintains a constant performing and touring schedule throughout North America. In 2015, LDB released an ambitious project titled “LowDown Sounds”  that included a critically acclaimed cameo by Roy Ayers on the track “Everybody Loves The Sunshine.” LowDown Brass is now set to begin the next chapter with the release of their fifth self-produced full length studio album LowDown Breaks. This new offering steps deeper into refining their unique sound, combining the hip hop sound with multiple world music and jazz styles.

LowDown Breaks sounds as if it could be comprised of samples – as if every instrument came off an old soul record – the drum “break”  from a JB’s record, or a horn blast ripped from an Al Green cut – and that was the idea from the beginning. But there are no samples on this record except in the transitions: DJ Alo (The Dread/Chicago) and Laelo (Sousa/Producer) sampled the LDB horns and drums, cut them up, replaced, remixed, and create LowDown Breaks. This concept is a nod to the breaks used by the original DJs and producers from the Golden Age of Hip Hop and gives the album a sound akin to “The Apache” or “Funky Drummer” while always sounding new and fresh.

Lowdown Breaks includes several marquee collaborations with stellar artists including: Chicago rapper Ang13 on “Cold Shoulder,” Fada Dougou on “Don’t Wait! Right Now!,” DJ ALO and The Dread on “Ghost Town” and “Can I Kick It”, as well as a remix for the video for “Can I Kick It” by Nick The Graduate (Illuminati Congo/Chicago). The album was tracked in Chicago at The Drake by Anthony Gravino (Davy Knowles/Marquis Hill)  and mixed by legendary hip hop engineers/ producers Alex Gross and Dan Zorn at Studio 11. As track #1 iterates – LowDown breaks tradition, breaks expectations, and makes a break for your ears.

“‘The Container Series,’ as part of our 15th year anniversary, is an attempt at connecting with our fans who may have not witnessed the live LowDownexperience. It’s our way of giving everyone a glimpse of the real thing without the ticket price. LowDown Brass Band,  live in your living room!” ~David Levine, Founder