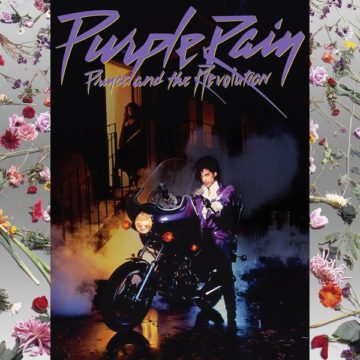 First things first. I love Prince. I love Prince And The Revolution and I love Purple Rain. I loved it when it first came out on June 25, 1984 and it has been a mainstay on my turntable and CD player ever since. So I was looking forward to this reissue. The thing with reissues and remasters, the can be a tricky thing.  They can be brilliant (the recent Sgt. Pepper’s Lonely Hearts Club Band by The Beatles, or Bob Dylan’s Mono Masters, or Fleetwood Mac’s Tusk reissue) or underwhelming (such as the New Order reissues on Rhino, The Clash remasters, or the David Bowie reissues on Rykodisc). Prince, as an artist, seemed to be aware of this and during his lifetime he did not remaster and reissue any of his older albums. Sure, he rerecorded “1999” in 1999 and touched up some of his masters for ‘greatest hits’ compilations.  But Prince was more concerned with the present and his new recordings to tamper with the past. Or so it seemed.

This remaster of Purple Rain was completed by Prince in 2015, maybe for a 31 year anniversary reissue, or maybe he felt the existing CD just did not sound as good as he thought it should sound, yet did not release it. The truth is he did an excellent job. The music sounds sharper and more alive than ever before.

The guitar in “Let’s Go Crazy” is simple stunning and the ending of “Purple Rain” never sounded so energetic. All stops in between sound equally brilliant. Prince did the amazing job of remastering while maintaining everything that was great about the original album. Fans will love the sound and urgency of this disc.

If this reissue was just that disc it would score a nine out ten. The problem is the expanded part of this package. Disc three is a treat, as it is all the single edits and remixes that were released in 1984/85. Prince always provided excellent non album ‘B’ sides that were as good as, if not better, than the actual ‘A’ side.  “Erotic City” is stunning and was the equal of “Let’s Go Crazy”. It was an excellent single upon release. The extended versions of both songs are enjoyable and take you back to a time when remixes were interesting and creative. “17 Days (The Rain Will Come Down, Then U Will Have To Choose. If U Believe Look 2 The Dawn and U Shall Never Lose)” is every bit as good as the seven inch edit of “When Doves Cry” and deserves the exposure. Sadly, the reissue has eliminated the parenthesis part of the title, but it does not diminish the song. And finally, “God” (the ‘B’ side to “Purple Rain”) comes in two versions. The original and the instrumental that was only found on the U.K. 12 inch (titled “God (Love Theme From Purple Rain”).

Again, had this been a double CD, clearly a nine out of ten. Great packaging, a wonderful essay by engineer Susan Rogers and the sleeve looks good. The downside of this set are the other two discs.

The DVD disc is a video from the Purple Rain Tour from 1985. This was originally released in 1985 as a video called Prince And The Revolution: Live. The powers that be simply took the video and transferred it to DVD, No remastering, no going back to the source material and making it look sharp, NOTHING has been done for the reissue. They did not even remix the sound into 5.1, which would have been stunning. It looks terrible on anything remotely high definition and although the music is brilliant, the visual become a distraction. I have seen video restored (Zappa reissues are a good example) and it can look much better than this release. Pity.

Then there is disc two, made up of unreleased material from the album/film. Prince himself issued ‘music from the vault (1994’s Come; 1996’s Chaos and Disorder; 1999’s The Vault: Old Friends 4 Sale) and even issued the infamous The Black Album in 1994. None of these songs were mastered or remixed by Prince, so one wonders if he thought they were good enough to be issued.  He certainly did not think so in 1984, 1994, 1996, or 1999 when he was going through his unreleased masters. Prince cared a great deal about what he issued. He released a great deal and with each release it was clear that great thought and care was taken in the albums. That includes the albums Come, Chaos and Disorder and The Vault: Old Friends 4 Sale.  All excellent albums and huge successes in their time.

The songs here are interesting, but overlong. “Computer Blue (Hallway Speech Version)” clocks in at 14 minutes. It is simple, not interesting enough to maintain attention for that long. “Love and Sax” is enjoyable as is “Possessed”, but truthfully not Prince’s best work. The saving grace on this disc is “Father’s Song”, a song written by Prince’s father (John L. Nelson) and parts of which Prince used in “Computer Blue”.

If they had wanted to add another disc, I think fans would have better served by the music from the other artists in the film (The Time’s set for example is brilliant).  And if they are to include a DVD, clean up the source material before issuing it. It does make me wonder if this is the first of many reissues and unreleased material to come.

Purple Rain is a classic album, and Prince never achieved that level of success again in his career, although he made far superior albums (Sign o’ The Times comes to mind, as does N.E.W.S.). This album serves as a timepiece and an album full of some of the finest music ever released. It was also was one of the reasons Tipper Gore formed the PMRC so that we now have warning stickers on all of our albums today.

As an album, nine out of ten, but this reissue, due to the issues noted above, drops it down to a seven.  Now, I am off to listen to disc one again.

Born and raised in Whitby, Aaron discovered music through his love of The Beatles. This led to a career in radio, writing for various publications, and ultimately a radio show about The Beatles (Beatles Universe), which ran for over four years. When not immersed in music, Aaron enjoys spending time with the loves of his life -- his wife Andrea, and daughters Emily and Linda (all of whom have an intense love of music too).
RELATED ARTICLES
album reviewsi would die 4 uprince and the revolution
8.0