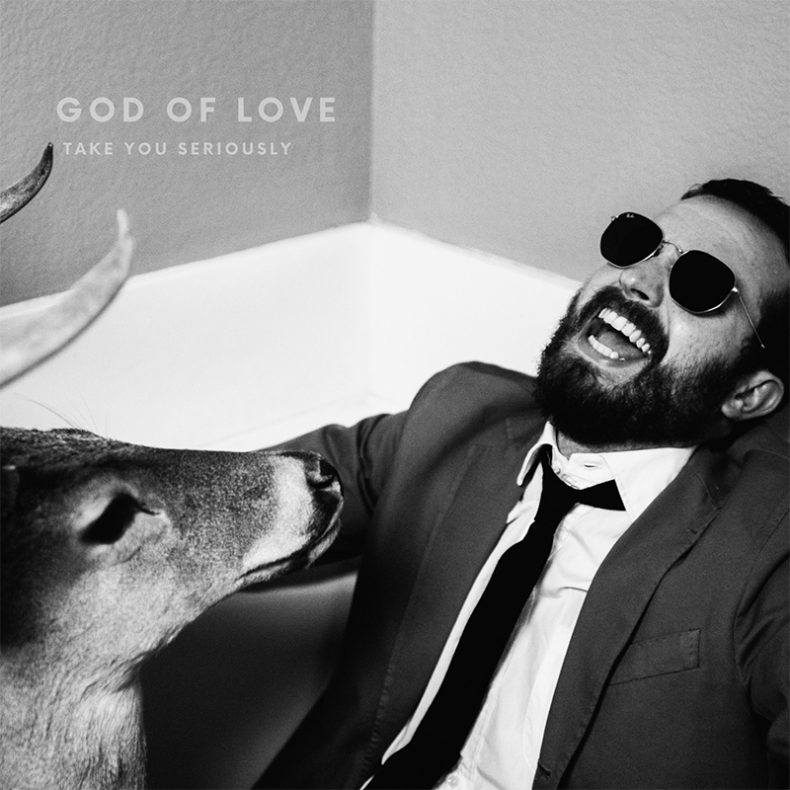 GOD OF LOVE – “TAKE YOU SERIOUSLY”

James Burnett, the man behind God of Love, took up the piano at 14-years-old just so he could join his older brother’s band. “We had a small following in Dallas but by my senior year we were ready to split up,” he says. Break-ups and make-ups, Burnett spent the next four or five years in and out of various bands with his brother and friends, recording two albums and moving to Los Angeles for a spell to pursue the dream. However, he ultimately decided that he was his own best band mate. “I had always wanted to take my own solo project seriously, so I decided to take advantage and focus on my own writing which takes on a more dark and brooding tone.” Dark and brooding it is, but also propulsive and gripping on the upcoming single “Take You Seriously” (July 2nd) being released on  Red Zeppelin Records) by Burnett’s solo outing God of Love. “I pulled influences from my teen years for God of Love,” he explains. Bands like Radiohead, The National, and Arcade Fire.” In his twenties, Burnett immersed himself in the work of songwriters such as Leonard Cohen, Townes Van Zandt, Nick Cave, and PJ Harvey. “They influenced me with a more singular intensity and an endless well of direction,” he says. Listeners can hear these sounds layered into “Take You Seriously,” which will feature on the upcoming God of Love album, and older fans may even hear a touch of Echo and The Bunnymen, The Cure, and Siouxsie and The Banshees in the mix.

Lyrically, Burnett also draws inspiration from iconoclastic masters. “I also had been reading as much as I could and found a lot of inspiration from the likes of Updike, Bukowski, Hemingway, Dostoyevsky,” Burnett says. “This record brought back a darker tone to my music and explored some of the more disturbing and exciting aspects of my own nature and how I see the world.” The new single and the album to follow arrive on the heels of a period in Burnett’s life that saw him returning to Dallas for a run of hard times. After getting sober and getting his head together, Burnett is now confident in saying that his new music “is now finished and ready to show to the
world.”

We did the video with just one camera and one cameraman (who was also the director.) We wanted it to feel like I was getting ready for some occasion. Whether that occasion was a show, a date, or just getting into a world of trouble. I always imagine God Of Love arrives where he is going with purpose and intensity and this video represents not only that deliberate preparation but also the sort of insanity it takes to make music and to perform. So there is a sort of romantic madness involved in the video. The director and I were alone in this bathroom and we had changed all the lights to red and just kept filming me singing the song from different angles and with different props. While the album is devastating at parts, this particular song has a more upbeat, endearing quality and a hopefulness, that says, “I’ll take you seriously,” and in doing so also demands it be taken seriously as well. The video is meant to reflect that earnest desire to be taken seriously, while being a bit of a crack-up. ~James Burnett, God of Love