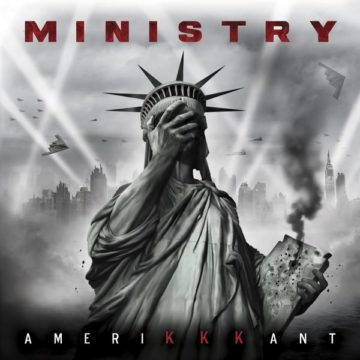 To say that America has been in a sense of disarray since the election of their current president, Trump, is an understatement. Every day or so seems to offer a new fiasco, ranging from taunting North Korea with war to appearing as a sputtering mess during press conferences, and the public backlash has been both livid and constant; yet the rock world has been relatively quiet. While hip-hop sensations of the likes of Kendrick Lamar and Run The Jewels have been consistently political in this period, few rock bands have carried on the tradition of protest music that was an inseparable part of the genre’s origins and legacy. In this manner, Ministry’s first record since 2013’s From Beer to Eternity — a record that was thought to be the final record from the band following the passing of long-time guitarist Mike Scaccia — AmeriKKKant is incredibly refreshing.

“I Know Words” opens with the sound of Trump’s voice, sampled and manipulated, as he spouts phrases synonymous with his political platform, most notably, “We will make America great again.” The song serves as an instrumental prelude driven by electronic textures and the incredibly rich tone of a cello. The following track, “Twilight Zone,” picks up exactly where “I Know Words” concluded and builds into a much more bombastic and explosive song. One of the most interesting traits of AmeriKKKant is how each song bleeds into the next, and while they are separated by individual song titles, the record can be viewed as one lengthy song that follows a narrative of questioning and challenging authority. The concept itself is quite ambitious; to my recollection, it has only been successfully done on Prince’s 1988 release, Lovesexy. However, Ministry’s take on this format creates a deep-rooted sense of coherence that only adds to the power of the lyrical content. In many ways, this is almost a protest to the often-disposable means and attitudes by which people consume music, as to hear only a part of this record, separate from the rest, is to listen to something that is incomplete. AmeriKKKant may not beg for your attention, but it certainly will demand it.

As the album develops, a number of short tracks mainly consisting of sampled audio introduce thematic information for the upcoming song. The amount of these tracks, while powerful in the sample selection, feels a bit too much, cutting the music of the album a bit shorter than one would expect. That being said, they communicate a message, giving the album an extra layer of depth. Musically, however, AmeriKKKant is among Ministry’s most exciting records in decades. “We’re Tired of It” leans heavy on modern thrash metal, while “Wargasm” is much more in line with current industrial work from the likes of Filter and Nine Inch Nails. The best tracks, however, are near the end of the record. The lead single “Antifa” is a modern industrial masterpiece, while the following two tracks, “Game Over” and “AmeriKKKa,” (which features the unexpected use of horns and a lengthy guitar solo) are just as heavy and intense; ultimately ending the record at its strongest.

When I spoke to Al Jourgensen — the mastermind and sole founding member of Ministry — he reaffirmed that AmeriKKKant was simply a reflection of what he was seeing socially, culturally, and politically under Trump’s reign. AmeriKKKant paints a bleak portrait of an America that is on the brink on implosion. This is a record that sounds like a dystopia. It’s desolate, aggressive, and disheartening. This is where the heart of the record lies and gains its momentum from as a tool for revolution and reform. Ministry pulls no punches on AmeriKKKant, a record that successfully sets the musical tone for America of today, while also serving as a strong comeback for the industrial rock pioneers.

A passion for music has always been a part of Gerrod’s life. As a young boy, he was raised on a steady diet of the music from The Chili Peppers, Aerosmith, The Stones, Prince, and others from his mum. Raised in the GTA, Gerrod continued to foster his love for music by attending a wide range of concerts and learning the drums. His unapologetic passion for music has no bounds and has spread to a wide variety of styles, whether it be the 90’s rock that sound tracked his teenage years, the jazz he studied in university, or his newfound love for hip-hop. He recently received his bachelors in music and education from York University and is passionate about writing and reviewing good (and less than good) music. Gerrod is also the drummer and songwriter for a Toronto based rock & roll band, One In The Chamber.
RELATED ARTICLES
album reviewsamericaamerikkkant
9.0