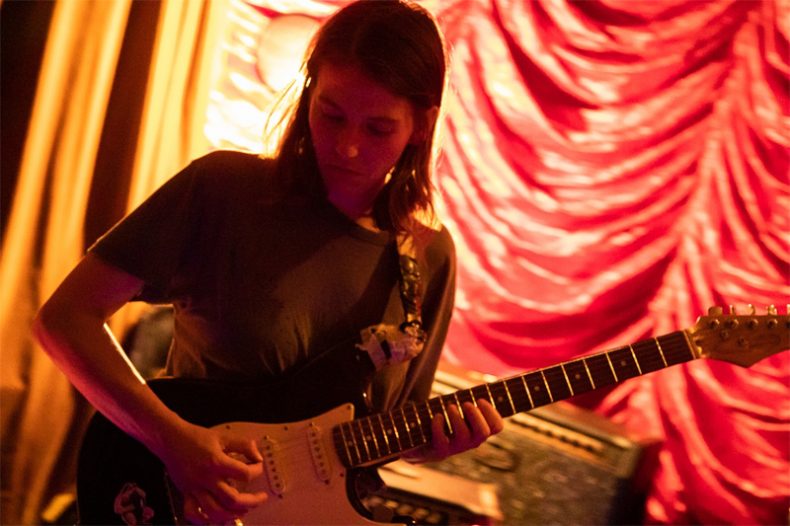 Immersed in fuzz and feedback, today we have the pleasure of premiering ‘Degnerate Moon’ from Holland’s Alienbaby Collective. Turn it up load and don’t worry about the neighbours – they’ll surely come around to love this too, either on the first take or repeated listens. This track is the first sound offering from the band’s double EP ‘F I S H B O W L / T E R R E S T R I A L’, to be released digitally and on 12″ vinyl through UK label Humm Recordings.

Loaded with vigorous guitar on a canvas of beat-driven rapidity, Alienbaby Collective’s debut single is a power-wielding anthem of fuzz-imbued mistiness and potency. A true lifeforce in a landscape of offerings that come too too close to our expectations. Could ABC be the avenger of good honest lo-fi hormone-fueled alt-rock that we’re all hoping for? ‘Degenerate Moon’ gives a solid nod in this direction.

Alienbaby Collective is guitar-driven noise-pop at its finest. This is the solo project of Liú Mottes, previously guitarist in both Blue Crime and New YX and also currently playing with SOON, Slow Worries and OBOL LE. Part Sonic Youth, part Trent Reznor, part Breeders, part PJ Harvey and part locomotive train – then, all of a sudden, the song ends abruptly. It doesn’t crash – it just disappears, as if it never were.

Directed by Alicia Breton Ferrer and filmed on 8mm film by Sjors Mosman, the accompanying video captures Liú and friends in odd and peculiar positions and actions in the most mundane of standard apartment-laden environments, the kind of apartment and furnishings rented out anywhere from the UK to the former Soviet Union. It could be anywhere. It could mean anything. It could not be anyone. The actors are apparently under the influence of the ordered chaos reflected in this song itself.

Alienbaby Collective started with both the incessant need to make songs and sounds and as an experiment with recording when all you have is a half-dead laptop and the cheapest audiointerface. From there it became a way of trying to create something that was of the moment, to capture a mood, a glimpse of Now. F I S H B O W L and T E R R E S T R I A L were both made within the same year and accidentally tell a story in two parts of that specific piece of time.

“This is a double EP or two small records that I made at home in my bedroom within a year and half of complete personal unrest. These songs started as little try-outs, like experiments with recording in the most basic way and with the cheapest things you can find, but they ended up being quite honest depictions of that time. Soundwise, they are an attempt to stay with what comes out when you just play and then go with that: the spontaneity of what happens in a moment,” says Liú Mottes.

“Often there is imperfection (but what does that even mean?) in that playing or in the way it is recorded, but it communicates something that was right there at that specific time. Lyrically, I only ever seem to write about coping with constant change and the words come out as a combination of that feeling with images of dreams, transformations/ metamorphosis and the end of the world.”

When playing live, Alienbaby Collective tries to communicate by moving in and out of songs and noise improvisations with short guitar loops and distorted vocal textures. The hope is to create something that is both familiar and unknown – to create a space made of sound, where individuals are asked to immerse themselves in that comfortable obscurity and join the collective.

“I met James Ferguson from Humm Recordings at a show in Utrecht, NL where I was playing with Alienbaby Collective and he played with Broads. There was an instant liking and we kept in touch. We seem to be kindred spirits in music and he proposed to release my EP’s as a double EP on vinyl, which I still can’t really believe and I feel very grateful for. I think it is a wonderful thing to work together with people that love music in a similar way and that have a real motivation to support other artists. Small scenes of very talented people and great bands helping one another out,” says Liú Mottes.

As of February 7, ‘Degenerate Moon’ will be available digitally across streaming platforms. The full ‘F I S H B O W L / T E R R E S T R I A L’ double EP will be released on March 6 on vinyl and digitally. Both versions can already be pre-ordered via Bandcamp at https://hummrecordings.bandcamp.com/album/alienbaby-collective-fishbowl-terrestrial-lp-humm10