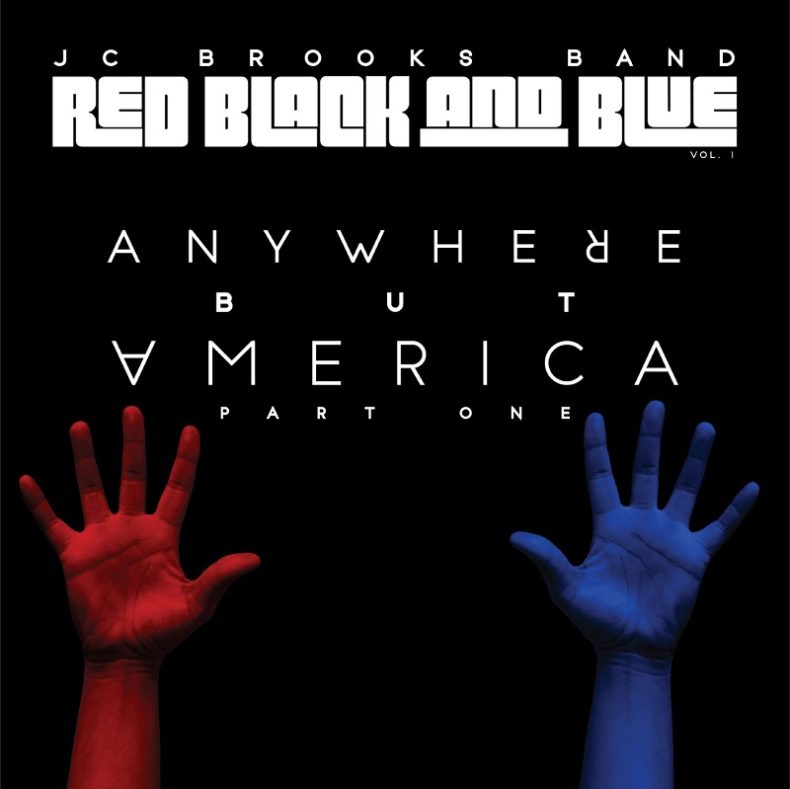 “Anywhere But America, Part One” was created to satisfy the need for the JC Brooks Band to return to their soul roots. What was not known was that the song would be a scrupulous break up letter to America that would stab any lover in the heart. The music lays out visuals of a ghostly platform for JC to write his ode to America. The choir and use of the church organ throughout the song, played by renowned recording artist Frank McComb, continues to paint a backdrop of a funeral held in a black church.

JC cleverly entangles lyrical ideas from M.L.K’s “I Have a Dream” speech with the Star Spangled Banner. “Anywhere But America, Part One” is a witty villanelle expressing Black America’s disdain for the country’s actions of the past and present.

The band’s percussionist JoVia Armstrong composed “Anywhere But America, Part One” and lead vocalist JC Brooks wrote its lyrics. Armstrong focused on creating simple chords for a simple song that will guide attention to JC’s lyrics and vocal delivery. The studio production of the song took it to another level of intensity. The band recorded the song in just two takes. Adding male and female choir-like vocals to the background made it a bit more Gospel. A dark and haunting reverb was added to the kick drum in the verses. Renowned recording artist Frank McComb was in Chicago during the production of the song and the band was able to grab him to play organ, which really took us to church. The lyrics are compelling and JoVia’s composition and production create a solid, powerful vessel to carry their message.

Red Black & Blue, Vol 1 is an EP about the evergreen frustration of being gas-lit by someone who’s only slick enough to trick himself but not you.

You know you’re not just another indie soul band when your city sends you halfway around the world to showcase the sound of 21st century Chicago. Or when the mayor of Chicago personally invites you to play his inauguration concert or calls you to entertain foreign dignitaries. The JC Brooks Band came from humble beginnings, dreaming about getting the cool kids to shake it at the Empty Bottle and since have collected a wide range of fans around the globe. Wilco’s Jeff Tweedy befriended the post-punk soul group after they scored a viral hit with their amped-up re-imagining of his song “I Am Trying To Break Your Heart,” performing it with them at Chicago’s Park West and inviting them to appear at Wilco’s Solid Sound Festival alongside heavy hitters such as Sonic Youth’s Thurston Moore and the Band’s Levon Helm. Jake Johnson and Aubrey Plaza appeared in a music video with them. The taste-making crate diggers at the Numero Group were impressed enough by the band’s take-no-prisoners live show to include them in their Eccentric Soul Revue, where they had the pleasure of collaborating with the spectacular Syl Johnson. The JC Brooks Band has shared stages with a staggering array of artists, from legends like Robert Plant, Buddy Guy, and Chicago, to indie faves Peter Bjorn & John and the Dismemberment Plan, and soul stirrers Fitz & the Tantrums, Sharon Jones, Lisa Loeb, Lee Fields, and Naomi Shelton & the Gospel Queens.

Erupting with raw emotion, JC Brooks unleashes his soulful shouts and heart wrenching falsetto over the relentless rhythm of guitarist Alec Lehrman, drummer Kevin Marks, bassist Theodore Berry IV, keyboardist Jeremy Tromberg and percussionist-extraordinaire, JoVia Armstrong. JC Brooks and his band are a force to be reckoned with, leading the Chicago Tribune to call them “the real deal” and MOJO Magazine identifying them as “one of the hottest US soul acts”, while the New York Times praised their “neo-soul glory” and the Onion AV Club declared their first album “relentlessly catchy”. It’s live, it’s compelling, it’s now, it’s theatrical. So theatrical, in fact, that they were tapped to star in the critically-acclaimed run of the Tony Award-winning musical “Passing Strange” at the Chicago Center for the Performing Arts.

“Anywhere But America, Part One” was created to satisfy the need for the JC Brooks Band to return to their soul roots. What was not known was that the song would be a scrupulous break up letter to America that would stab any lover in the heart.”

SPILL TRACK OF THE DAY is published daily, showcasing the best in recent independent releases, with a focus on the Toronto Indie Music Scene. We also feature tracks from across Canada and around the World, including Canadian francophone releases. Remember -- you heard them here first. ;)
RELATED ARTICLES
chicagonew musicnew music alert