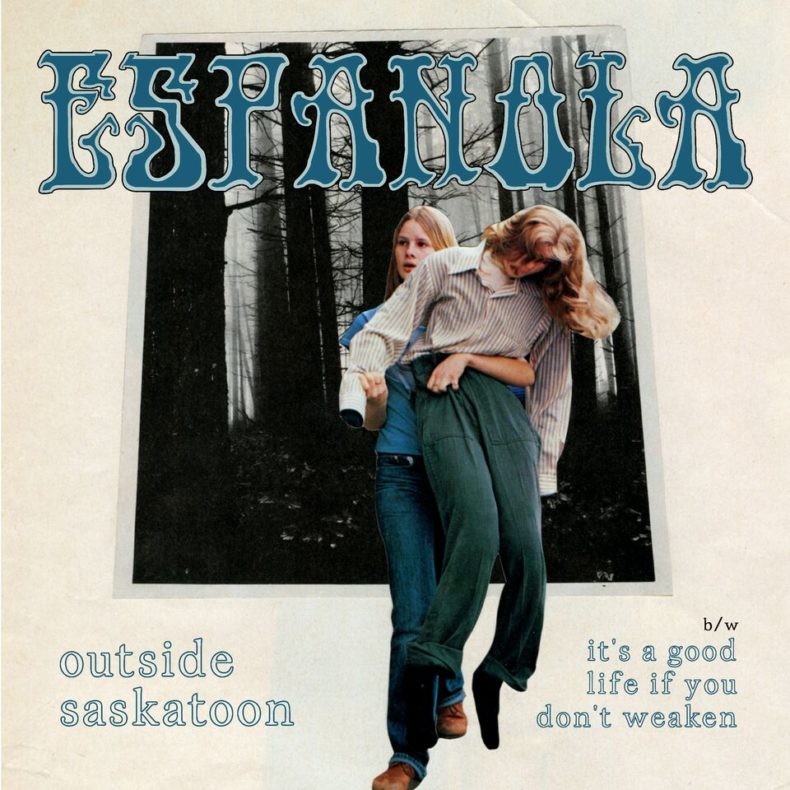 Best-known as a touring member of City and Colour, Aaron spent most of his touring life working with Daniel Romano and Lee Harvey Osmond. He’s recorded and toured alongside respected musicians such as Elliott Brood, Kathleen Edwards, Matt Mays, Cowboy Junkies, Bry Webb and others. Over the past few years he’s also played on a wide mixture of records like July Talk’s ‘Touch’, the new Skydiggers, the new Weaves, the last couple Donovan Woods releases.Spending so much time working on other people’s art has often left little time for his own. So it’s a rare occasion that Aaron Goldstein releases his own recordings.

Today we are pleased share the latest track from his project, Espanola as our Track Of The Day. “Outside Saskatoon” recalls a trip to Saskatchewan. The single is drenched in lyrical longing and fueled by nostalgic feelings, check it out for yourself below!

These new songs are really part of an LP that I’ve been working on for nearly 5 years, just trying to sneak in bits of work here and there between tours and recording commitments. In 2013 I had a two-week block open up when a tour was cancelled and I ended up trucking out to PEI and did a bunch of writing at a place called The Dunk, which is out on the Dixon Road near Breadalbane, sort-of in between Charlottetown and Summerside. The place was run by this fellow Hal Mills who was basically just a great friend to songwriters and artists, a real music lover and encourager of cool things. He was over 70, had built this bandstand on the property, and was throwing these big shows, people would come from all around to see these concerts. I don’t really make folk music but I dig the importance of shows that are a little less-traditional; those kinds of things are important in punk and underground rock music too. I threw quite a few of them myself coming up in Hamilton. I learned later that the Dixon Road was sort-of infamous on PEI for being a bit of an artists’ area, a place where weirder-than-usual folks might live, so I felt right at home. Anyway a good chunk of these songs were written out there.

That year I also played on a Zachary Lucky record at this studio called Sinewave, near the town of Delisle, SK. I kinda liked everything about it, from Chad Mason who built and ran the place, to the tape machine he was using, to the sheer isolation. The following winter in 2014, I was booked to play a small festival in Bruno, SK, which turned out to be just on the other side of Saskatoon from this studio in Delisle. At the time I didn’t have my own spot in Toronto, and there was something very nerve-wracking about making my own record here. This place in Delisle – you’d walk out the front door of the studio and, other than Chad’s house, there really isn’t much to see 360 degrees around except for a snowy prairie, some wooden fence and the occasional silo. Perfect isolation. So I called a couple pals from Saskatoon, Luke Goetz and Ryan Gullen, whom I knew had been at least sympathetic to the music I had made in my old band Huron. They came out to Chad’s with me and we cut a whole bunch of bed tracks. I finished most of the guitars and vocals there, then came straight back home and right into Boxcar in Hamilton where Dan Edmonds played some keys, and I did as well.

And since then I’ve pretty much hemmed and hawed over the material, the mixes, the various overdubs. I didn’t take the advice I give to virtually everybody who comes to make a record with me – a producer will provide the perspective that you inherently cannot have on your own music. However I’ve been lucky to have had a handful of collaborators and contributors who have told me enough that these songs should come out. I released two of those tunes in the Fall and there are quite a few more in the tank. I expect they will one day form an LP together.

To be honest I planned to release two more of those old jams at this juncture, but I got thinking about that trip to Saskatchewan, and the circumstances of that festival in Bruno, and the people I hung out with, and this new song “Outside Saskatoon” just kinda came out of me and I knew I should get it on tape in a hurry. A one-day session just a few weeks ago with drummer Glenn Milchem and bassist Anna Ruddick gave me this cut as well as a cover of the Hip’s “It’s A Good Life If You Don’t Weaken”, which I sang every night on my little tour last December. Carleigh Aikins came in and sang on both tracks. I played all the guitars and keys. There are so many of those old songs still hanging around, but this one in particular felt like it belonged with the bunch – and so much so that I thought it should come out right away.

New Music, Track Of The Day
espanolaindieindie musicit's a good life if you don't weakennew musicnew music alertnew releaseoutside saskatoontotdtrack of the day
espanola, indie, indie music, it's a good life if you don't weaken, new music, new music alert, new release, outside saskatoon, totd, track of the day
About the Author
SPILL TRACK OF THE DAY

SPILL TRACK OF THE DAY is published daily, showcasing the best in recent independent releases, with a focus on the Toronto Indie Music Scene. We also feature tracks from across Canada and around the World, including Canadian francophone releases. Remember -- you heard them here first. ;)
RELATED ARTICLES
indieindie musicit's a good life if you don't weaken

by SPILL NEW MUSIC on July 11, 2018
Weep Wave – “Birdhouse” A Spill Exclusive Video Premiere Over the years, the song “Birdhouse”, has developed and evolved, with an ever changing lineup. [...]