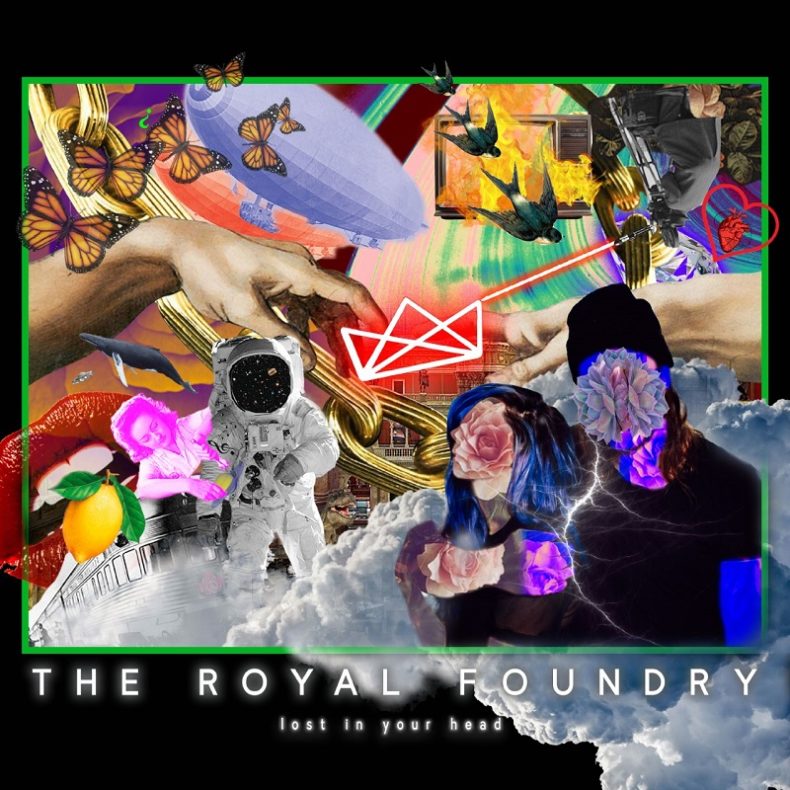 THE ROYAL FOUNDRY – “LOST IN YOUR HEAD”

This video/single is a radio edit of the title track from The Royal Foundry’s album Lost in Your Head. It’s an upbeat synth and Queen-esqe guitar driven declaration, that explores the great expanse and mysteries of the mind” says Jared. “The music video brings nostalgic past times and fuses them with dreamy lighting and kaleidoscope imagery. The Royal Foundry sing straight to the viewer, looking into their soul as they get LOST IN YOUR HEAD.

It may be cliché, but sometimes, when two people come together, the chemistry is instant – almost magical. The resulting artistry created is far more compelling, evocative, and memorable than if they had never met. The whole is truly greater than the sum of the parts for Alberta’s The Royal Foundry and their debut full-length album, Lost in Your Head.

Jared Salte and Bethany Schumacher, the core of the Edmonton-based Alt-Pop quartet, have created a collection of 13 songs that are not only eminently accessible for music lovers across a truly wide swathe of genres, but songs that are infused with emotional depth and complexity, with lyrics that are elegantly heartfelt and honest.

Formed initially as a folk duo in 2013, Salte and Schumacher enjoyed some success with their acoustic duo shows and released an independent CD. But both felt that there was more to say, both musically and lyrically. So began a significant revitalization and revision of their sound, incorporating elements of 1990’s Brit-pop lush production with power-pop stylings of groups like Arcade Fire, but with a healthy dash of old-school, 1970’s progressive rock such as the intricate melodies of Yes and Supertramp. And the intimacy of the music and the interplay between Salte and Schumacher’s vocals may also be reminiscent to some of The Civil Wars or Whitehorse.
It seems like an untenable mix, but one listen to the songs on Lost in Your Head and you will hear something incorporating all those elements, yet also strikingly original.

“When we started, it was economical to do the singer-songwriter duo thing – grab an acoustic guitar and banjo and that’s all you really need. And doing it in that simple manner was a great opportunity for us to learn how to write with one another, and we really treasure those moments,” said Salte. “But we found ourselves wanting to do bigger things musically, with more dynamics, so we started experimenting with programming and keyboards.”

Salte was raised in a musical household. His dad is noted musician, songwriter, and Christian teacher/speaker, Arlen Salte. Arlen played a number of different styles throughout his earlier career, selling more than a quarter million albums in Canada as both a rock and country artist. He also recorded a number of children’s albums.

Schumacher was always interested in music as a fan and a listener, having an ear for a good pop hook. She was organizing a high school function and Salte’s band was the hired entertainment. They met and the rest, as they say, is history.

“After we got engaged, he was working on some songs for his band and I helped write lyrics for one of them and it kind of snowballed from there. I can’t really explain it because I never really had an ambition to be a songwriter or musician; I was just the girlfriend making some suggestions. But that summer we wrote a song that was nominated for a songwriting award and we knew we had something. After we got married, we took the next four months and wrote 10 songs and made a folk album, and that’s kind of how The Royal Foundry began,” said Schumacher.

It is remarkable how quickly Schumacher has become so powerfully compelling as a lyricist in what is still a brief immersion into the world of music. The ability to capture the beautiful simplicity of one moment in time is evident on the single “Dreamers”, with its lush production and carefree musical vibe that melds with the words for a wonderful musical ride.

“We were driving Las Vegas to Los Angeles and, there was this moment, when Jared was behind the wheel, the windows were all down, and the radio was blaring.  There was no-one else on the highway and we were both in this state where your mind kind of drifts and you kind of forget about the cares of life and everything else that’s going on and you’re just in the moment. I just realized how peaceful and beautiful the experience was,” she said.

“Out of that experience, I wrote Dreamers. Simply put, it’s about being transported to this euphoric state of a dream that just washes over you with happiness.”

The song Running Away was penned by Salte and Schumacher not long after getting married. It ended up becoming a pivotal career move as it was indicative of the direction in which the pair’s music was heading.

“It was the one that really started the whole switch of genre and it came to us when were just beginning to play around with synthesizer sounds and found a patch that sounded really cool. We decided to enter the Peak Performance contest in Alberta, just to see how this new sound stacked up and we ended up coming in second place, winning $75,000. That song convinced us to shift our sound to where we are today,” explained Salte.

Their current single and video, All We Have, was an even earlier song, one that originally appeared on their folk album, but which both Salte and Schumacher believed could be adapted to the new, electronic alternative pop sound that has become The Royal Foundry’s trademark.

“We wanted to revisit it because we really liked the melody and the flow of it, so we grabbed all the stems of the previous version and started messing around with it, almost treating it like a remix. Then we also recut new vocals. The song itself, even in its early form, is very joyful and happy because that’s where we were at at the time as newlyweds. It’s that powerful moment when you know you’re with the person you’re supposed to be with for the rest of your life and the person who makes you feel whole, finally. And I think that feeling carries through in both the words and the music,” said Salte.

In the early days of their creative partnership, there was a more clearly defined division of labour, with Schumacher concentrating on words and Salte on music, programming and producing.
But as they have evolved as a couple and as creative spirits over the past few years, the songwriting has become a more intertwined and collaborative effort.
“We’re both still learning how to work with each other, and we’re now starting to get into both sides of the equation: Jared is writing more lyrics and I am starting to come forward with musical ideas and I am also going back into our back catalogue of ideas and pulling up older songs that I think we could really do something special with,” said Schumacher.

The rise to prominence has seemed rapid for The Royal Foundry, but it has been well earned. Obvious talent as songwriters, combined with an infectiously upbeat live show and a prodigious work ethic has been its own reward. Dreamers got national attention when the band played live for a World Cup of Hockey event in Toronto in 2016, and has also been used by Disney to represent their 2017 Wedding Dress Collection.  Running Away was played on radio stations across Canada, peaking at #23 on the Mediabase Alt-Rock Charts, and was used on TSN as the opening tune for their CFL broadcasts.

“We’re continually surprised by the recognition we get and the opportunities which have landed at our feet – it’s been a complete blessing. All of it has been an encouragement and what has fueled us to keep pushing onward,” said Schumacher.

“At the end of the day, we’re happy to be able to say we’re musicians and make music. We are excited to be able to share our music, to play it live, and to tour.  That, to us, is more rewarding than anything else.”

SPILL TRACK OF THE DAY is published daily, showcasing the best in recent independent releases, with a focus on the Toronto Indie Music Scene. We also feature tracks from across Canada and around the World, including Canadian francophone releases. Remember -- you heard them here first. ;)
RELATED ARTICLES
edmontonindieindie music