Long before East LA’s newest indie power trio became Lone Kodiak, singer/guitarist Dainéal Parker and bassist Daniel Alden were in a Portland band called emberghost. Having risen to the upper ranks of a crowded PDX “post-hardcore” scene with their aggressive mix of anger and sorrow, emberghost reliably sold out large venues like The Roseland and earned itself a trip to NYC to meet with Sony Music. It was around this time that their co-vocalist, the extraordinarily talented Sarah Jennings, was diagnosed with an inoperable brain tumor. Sadly, she would not recover.

The backstory is important here, because though Lone Kodiak is a young band, the music conveys a rich history, littered with difficult, sometimes devastating memories and profound experiences alluded to in a reflective, nostalgic tone. There was some reluctance to start again from the beginning – are we really going to put ourselves through all that again? Anyone who’s done it knows it takes a lot of effort, a lot of patience, a lot of rejection, and a lot of vulnerability to become something from nothing. but once they picked up drummer Andrew Smith, who injected a kind of energy into the music they weren’t expecting, they decided that if they were going to do it at all, they were going to really do it. 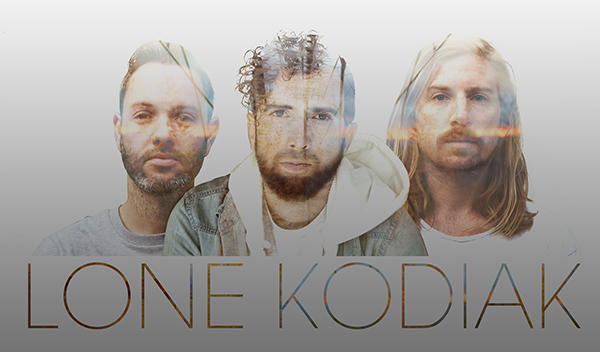 Produced by Johnny What (BRÅVES, Nikki Reed), mixed by Kyle Mangels (Lady Gaga, Goldilox, Haley Reinhart), and mastered by Grammy Award winning, John Greenham (Ice Cube, Bastille, Katy Perry, Sam Smith), “Calm Down” is the first single from the band’s forthcoming debut double EP “Feet in the Water.” Featuring exuberant (and real) strings, driving piano, eloquent acoustic guitar which offsets the energizing electric guitars, pep rally claps, both male and female vocals, and a distinctive hook, all in a hard-to-resist 3/4 time signature. The band have dubbed the sound “campfire rock,” as it is intimate and honest enough to be a bedside lullaby while yearning to be an arena smash.

“The right hand piano part is where this one started,” explains Parker. “I was goofing around, playing an old news bulletin pattern, when I almost accidentally added the 3 left hand chords.”

“Calm Down” features the graceful, transcendent voice of Alex Rhodes. “The second I heard her voice come in on ‘Astronaut’ [one of Rhodes’ singles], I knew she was the one,” Parker said, “there is a emotionally devastating tenderness to her voice that we instantly fell in love with.” Lone Kodiak asked her to sing on the entire EP as well as the B-side, “Living Room Editions.” LA violinist, Stephan Hovsepian, provided the captivating real strings just two days before the mix was due for mastering.

The debut single embraces light and life with a gang-chant melody that will stick with listeners for days. The effervescent rhythms, compelling guitar, bouncy choruses and a brooding breakdown are a potent recipe. Lone Kodiak isn’t too bashful to be catchy nor too pop to forgo meaningful lyricism. “Calm Down” captures an intoxicating moment that sets the bar high or this new trio.

SPILL TRACK OF THE DAY is published daily, showcasing the best in recent independent releases, with a focus on the Toronto Indie Music Scene. We also feature tracks from across Canada and around the World, including Canadian francophone releases. Remember -- you heard them here first. ;)
RELATED ARTICLES
lone kodiaktotdtrack of the day