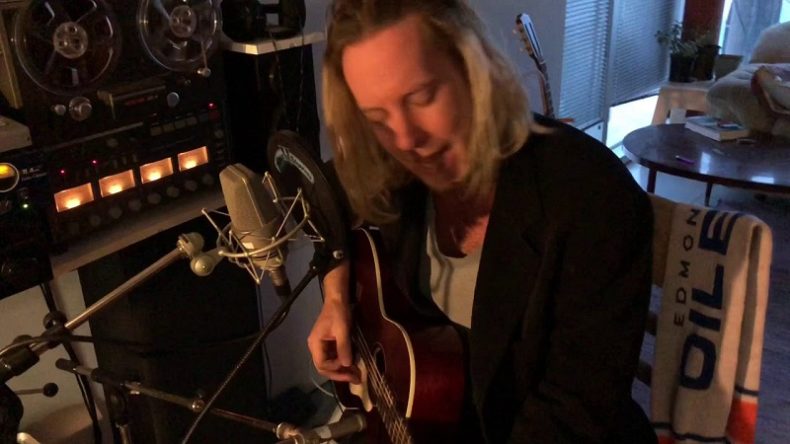 JOE NOLAN – “ALL YOU GOTTA DO”

With the turn of a new year comes some great news — new music by one of Spill’s favourites, Edmonton Singer-Songwriter Joe Nolan.  With his third album set to be released any day, the first cut has already won him The Cobalt Songwriting Award Grand Prize at the recent Maple Blues Awards.  The win is well deserved.

Joe Nolan bares his soul in every song he writes, and this one is no different. He will make you cry.  He will make your heart bleed. He will make you want to tell him that everything is going to be okay.  He will take you to the edge and back, his voice at times rough as a jagged knife, other times smooth as a surgeon’s scalpel.  Joe Nolan will make you feel many things, but apathy is not one of them. If “All You Gotta Do Is” is any indication, Cry Baby will no doubt take us on a hell of an emotional ride, but you can be sure it will be worth it.

Joe Nolan is back. The roots rocker from Edmonton, Alberta is on the verge of releasing a ground-breaking new record, Cry Baby. This time around Nolan makes a record which hits close to home: recorded in the dead of winter with Scott Franchuk, it’s a departure from his previous work Tornado, which was produced by Colin Linden in Nashville, TN back in 2014.

Cry Baby is a collection of 11 songs which take you on a trip of melancholic madness. The vision behind this album is one that Nolan has kept locked up inside for the past three years. It is clear that he has had struggles of his own; through darkness and depression, booze filled evenings, and broken relationships, he shares his deepest secrets and outlooks in this effort.

Nolan’s constant strength is his lyrical ability which he continues to deliver through and through. His words and imagery pierce the heart of the listener and pull you in, they will have you hanging off each breath. He is not afraid to bleed – his open, wounded-heart delivery reminds us that we are all human. His unapologetic vulnerability is brave and endearing. The album journeys through his early days, his first love, his feelings of failure and his never-ending search of finding his place, and where he fits in. A second chance, a new beginning.

He is ready, and we know it.

Trish Melanson lives in the Toronto area with her three boys, Nicholas, Justin, and Eric, her dog Jakkson, and her cats Max and Jagger. She is the former host and producer of Canadian Kickass, a weekly two hour radio show on New Jersey's Chestnut Radio, showcasing Canadian Music. She is also a former Web Content Manager of Indie Soundscapes, an online showcase for Independent Music Artists Worldwide, and was a regular music contributor to The Stroumboulopouli. She is a fervent supporter of the Toronto live music scene. In a past life she was a teacher and Vice Principal in Durham Region. She has many more new and exciting projects waiting in the wings. ;)
RELATED ARTICLES
bluesedmontonjoe nolan
7.0