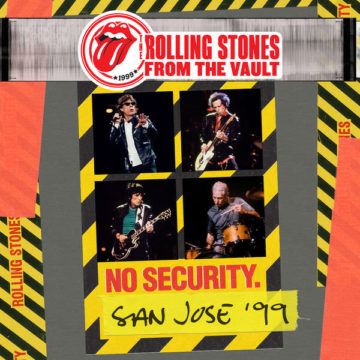 The Rolling Stones
From The Vault: No Security – San Jose ‘99
Universal Music Group

Hot off the heels of their recent European No Filter tour, The Rolling Stones, one of the greatest rock ‘n’ roll bands to ever grace a stage, have turned their attention to their From The Vault series which, in the past, has brought concerts from the band’s illustrious career into modern accessibility, most notably including their infamous 1981 concert at the Hampton Coliseum, a show from The Marquee Club in 1971, as well as the Sticky Fingers anniversary show at The Fonda Theater in 2015. True to form, From The Vault: No Security – San Jose ‘99 is an excellent live album – and one of the few official releases – from that era of The Stones career. With a twenty song track listing, consisting of major hits and a handful of deep cuts, that runs a near two hours in length, From The Vault: No Security – San Jose ’99 is a must listen to for any Stones fan whose excitement for the band goes beyond their recorded discography.

From The Vault: No Security – San Jose ’99 opens the high energy “Jumpin’ Jack Flash” – a quintessential hit from the late ‘60s – followed by a Sticky Fingers B-side that is unfortunately often overlooked and horn driven, “Bitch”. The pair of songs prove to be a perfect introduction before the band dives into “You Got Me Rocking”, the lead single from 1994’s Voodoo Lounge. Say what you will about The Stones’ catalogue of recorded work from the decade, but three songs in and it’s still clear that at no point in their career did The Stones ever refuse to not pull out all the stops in concert.

While hits like “Paint It Black”, “Honky Tonk Women”, and “Start Me Up” have lasted the test of time into ’99 – and more importantly to today – it is always impressive to listen to how The Stones improvise over their most well-known material to give the impression that a spark of something truly special is happening at the moment through their spontaneous nature. As a diehard fan who has listened to their live work from all eras, it is also refreshing to see how the band evolves through their performances on each tour. While the band’s high energy is always admirable, when they slow it down and really indulge in the blues is always a highlight. Their performance of “I Got The Blues” and the Keith Richards led “You Got The Silver” are no exception – with the later signifying a shift in tone that feels far more intimate as Richards’ gravelly voice croons over the soulful twang of Wood’s guitar with an overall air of utter coolness.

Despite the curious absence of “Satisfaction”, From The Vault: No Security – San Jose ’99 comes to a thrilling close with “Sympathy For The Devil”. The song is as exciting as ever as the band rips through an array of pianos, percussion, and additional interwoven lead lines from the guitars while Jagger’s ageless vocals and Keith’s classic solo take the center stage – perfectly embodying duality of the glitz and darkness that flows through not only the song but also the band’s career and furthermore, the essential difference between The Glimmer Twins. If From The Vault: No Security – San Jose ’99 is any indication, even when it was cool to rip on The Stones for hanging on to a genre that had seemingly evolved past them – when they were thought to be well past their prime – The Rolling Stones were still the greatest rock ‘n’ roll band around.

A passion for music has always been a part of Gerrod’s life. As a young boy, he was raised on a steady diet of the music from The Chili Peppers, Aerosmith, The Stones, Prince, and others from his mum. Raised in the GTA, Gerrod continued to foster his love for music by attending a wide range of concerts and learning the drums. His unapologetic passion for music has no bounds and has spread to a wide variety of styles, whether it be the 90’s rock that sound tracked his teenage years, the jazz he studied in university, or his newfound love for hip-hop. He recently received his bachelors in music and education from York University and is passionate about writing and reviewing good (and less than good) music. Gerrod is also the drummer and songwriter for a Toronto based rock & roll band, One In The Chamber.
RELATED ARTICLES
album reviewalbum reviewsblues
8.0