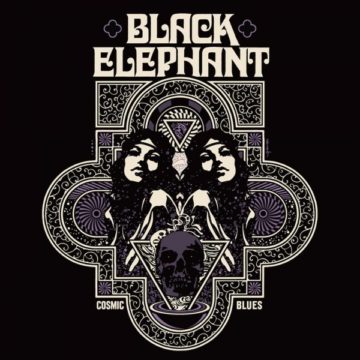 Black Elephant’s 2018 release of their second LP Cosmic Blues comes four years after their raw and far from mature debut Bifolchi Inside. In that time, the Italian Stoner Rock outfit have had the chance to take a step back and rework their sound significantly, taking in wider influences and coming across as a band interested in doing more than just jamming in a garage together (which is a good thing). While their first full album, which followed the 2012 EP Spaghetti Cowboys, certainly had its ups, the progression away from the foul-mouthed, heavy for the sake of being heavy stoner/doom/motorcycle enthusiast rock/metal is a welcome change.

Yet, while their debut album left something to be desired in maturity and artistry, the energy and edge that Black Elephant’s sound carried seems to have been unfortunately reined in on Cosmic Blues. To add to the disappointment, the more “serious” and “palatable” sound that the band were hoping to achieve falls flat due to a clear inexperience with writing and producing songs of that nature. Most of the more “atmospheric” parts stuck out as being there for the sake of being there, rather than for the sake of the music. Without the full range of their heavy sound on display, the record comes across as much more generic than they would have hoped.

While credit must be given for ambition, Black Elephant’s weaknesses were even more exposed by that drive to do more. The longer tracks like “Helter Skelter” did not do much with the time they were given, to the point where only four of the seven minutes really felt necessary. While “Baby Eroina” had more substantial content and structure that seemed to go somewhere, their inexperience with more drawn out song progressions was still apparent. While the song worked well, it definitely felt like it would work much better in a live context than it does recorded. This is a comment that seems to be generally true of the rest of Black Elephant’s music as well.

Stoner Rock has experienced a continued surge of popularity the last couple of decades, especially in Southern and Eastern Europe. With bands like Stoned Jesus, Naxatras and Somali Yachtclub gaining significant exposure for a cleaner, progressive stoner sound, it feels like Black Elephant were trying too hard to fit in with their peers. Tracks “Chase Me” and “Inno” show that the band has significant creative potential when they don’t try as hard. The gratuitous shredding that permeates Black Elephant’s music sits a lot better when the music feels more honest. Songs like”‘Walking Dead” just sound like cheesey Red Fang rip-offs without that sincerity.

To give the band some deserved credit, the album is quite groovey and listenable, more so when you don’t really pay attention (or you’re somewhat stoned). Despite all its flaws, Cosmic Blues is an album that will be enjoyable for anyone that appreciates the stoner brand of fuzzy heaviness. It just won’t blow your mind. While Black Elephant is hardly pushing the genre forward, their more mature second effort is definitely a step in the right direction. Hopefully the Italians will be able to continue to move forward without leaving too much of themselves behind next time around.

Based in Montreal but raised across Western Europe, Andrew feels at home both everywhere and nowhere. Having picked up the piano at age four, he has since gone on to add clarinet, saxophone and guitar to his musical arsenal. As well as crafting music, Andrew spends a lot of time listening both at home and in live contexts. Rather than focusing on a particular style or calibre of artist, he is keen to explore music of any shape or size. Outside music, Andrew's passions lie in philosophical writing, visual art and sharing positivity with the world around him.
RELATED ARTICLES
album reviewalbum reviewsblues
9.0