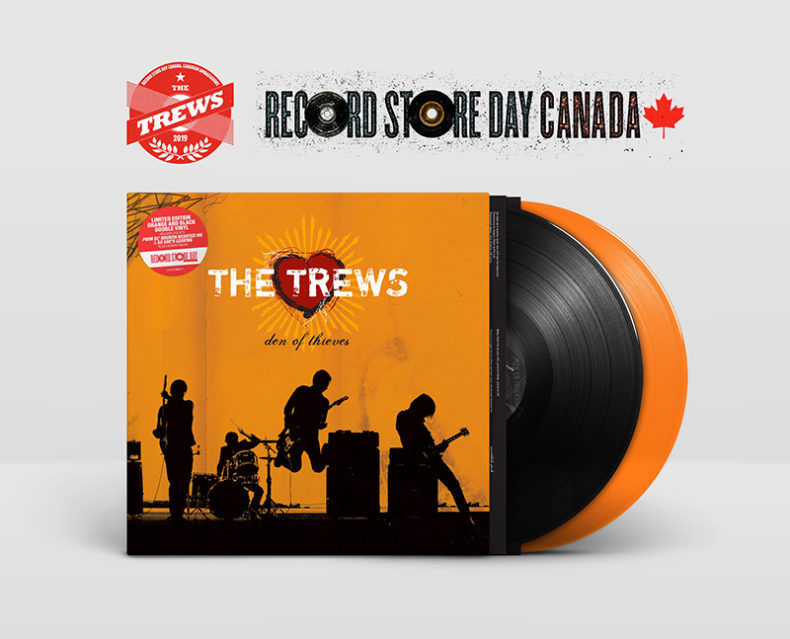 THE TREWS NAMED AS CANADIAN AMBASSADORS FOR 2019 RECORD STORE DAY

Nova Scotia’s own The Trews have been named as Canadian Ambassadors for Record Store Day 2019. The honour has been bestowed on the rockers as part of the lead up to 2019’s Record Store Day, which takes place on April 13, 2019. The Trews join notables Pearl Jam (2019 USA Ambassadors), The Sheepdogs (2018 Champions of Canada), Elton John (2017 RSD Champion of Great Britain), Jack White (2013 RSD Ambassador) and Dave Grohl (2015 RSD Ambassador) in celebrating independent record stores.

The Trews will be releasing an exclusive pressing of their 2005 game-changing album Den of Thieves. Certified Canadian Gold with over 50,000 sales, Den of Thieves established the band as radio heavyweights with the iconic hits “Poor Ol’ Broken Hearted Me” and “So She’s Leaving.” Available on double vinyl for the first time, the Record Store Day Canada special edition features transparent orange and classic black vinyl, rare photos, new liner notes from John-Angus MacDonald, plus 5 bonus tracks including “Den of Thieves”.

“As avid vinyl collectors and listeners we are proud to be Record Store Day 2019 Ambassadors for Canada! Independent record stores are great resources for the discovery of music and great hubs for building strong local music communities. Be sure and support your local independent record store today and everyday.” – John-Angus MacDonald

In 2018, the band released their 6th studio album Civilianaires on Cadence Music; their first in four years. Cut in Toronto, the band worked with legendary Canadian producer Bob Rock on 4 tracks, along with young and up and coming producer Derek Hoffman (The Elwins, Seaway) on this one. The band also co-wrote a few tracks alongside Canadian heavy weights Max Kerman of the Arkells (“Vintage Love”), and Serena Ryder (“Civilianaires”). Civilianaires debuted at #1 on the Canadian alt-charts, along with earning them a JUNO Nomination for Rock Album Of The Year.

Additional details will be announced soon on how to win tickets to see The Trews live in the following cities:

SPILL NEWS strives to keep our readers up to date with news and events in the music industry. We keep you informed of the most recent information regarding new releases, tour dates, and information items about your favourite artists.
RELATED ARTICLES
cadence musiccivilianairesnews