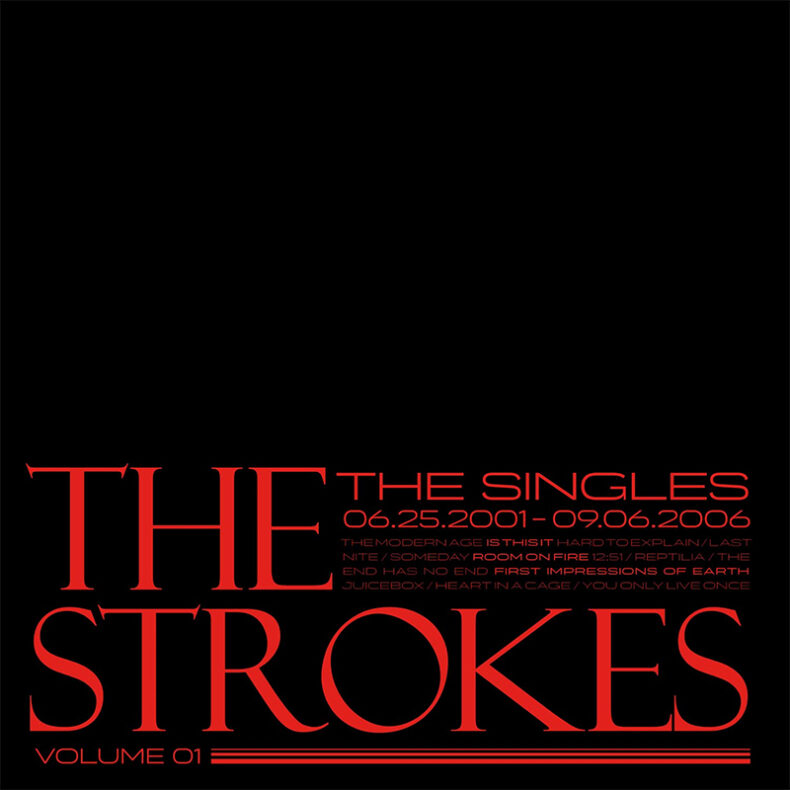 On February 24, The Strokes will release The Singles – Volume 01, a box set collecting the group’s electrifying early singles, via RCA Records/Legacy Recordings, the catalog division of Sony Music Entertainment.

Today, fans can get their first taste of The Singles – Volume 01, with the release of opening track “The Modern Age (Rough Trade Version).” An early version of a track off the band’s debut album Is This It, this recording was issued on an EP of the same name through the venerable U.K. indie label Rough Trade in January 2001. That release kicked off a global frenzy leading into the release of Is This It six months later.

Hear the new track and pre-order The Singles – Volume 01, available in digital and vinyl configurations, HERE.

The set features ten unforgettable singles from the band’s first three albums—Is This It (2001), Room on Fire (2003) and First Impressions of Earth (2006)—as well as rare B-sides from the original single releases. All ten singles will be pressed on black 7” vinyl with the artwork from each original release replicated in the package.

Videos for all ten A-sides, including “Hard to Explain,” “Last Nite,” “Reptilia,” “Juicebox” and “Heart in a Cage,” are now available in high definition.

Formed in Manhattan in 1999, The Strokes—singer Julian Casablancas, guitarists Nick Valensi and Albert Hammond Jr., bassist Nikolai Fraiture and drummer Fabrizio Moretti—were at the center of a fertile scene of guitar-driven rock bands in New York City at the turn of the 21st century. Their debut EP The Modern Age was lauded worldwide and major label debut Is This It, released later that year, was hailed as the best album of the year by Billboard, NME, Entertainment Weekly, Time and CMJ, making year-end best-of lists in The New York Times, Rolling Stone, USA Today, MOJO and earning the No. 2 spot on the Village Voice’s prestigious Pazz & Jop poll.

The Singles – Volume 01, a first of its kind collection from the band, is a perfect gift for the modern rock enthusiast in your life.

2A: Hard to Explain
2B: New York City Cops

7A: The End Has No End
7B: Clampdown (Live at Alexandra Palace)

SPILL NEWS strives to keep our readers up to date with news and events in the music industry. We keep you informed of the most recent information regarding new releases, tour dates, and information items about your favourite artists.
RELATED ARTICLES
julian casablancaslegacy recordingsnews
10

by SPILL NEWS on February 11, 2020
THE STROKES RETURN THE NEW ABNORMAL APRIL 10 VIA CULT/RCA FIRST NEW SONG “AT THE DOOR” OUT NOW The Strokes announce the release of their first new album in seven years, The New Abnormal, on April 10, 2020 via Cult/RCA. The band debuted the first [...]

by Kristen Manza on May 20, 2019
THE STROKES @ BUDWEISER STAGE, TORONTO MAY 20, 2019 “Toronto, are you ready for a Budweiser revolution?!” laughed Julian Casablancas, The Strokes frontman, as the band played a sold-out show at Toronto’s Budweiser Stage. This was a [...]
6.0

by Br. on March 30, 2018
The Voidz Virtue Cult Records This is an album more than any other that I have experienced recently that forces the listener to consider their filters. The kneejerk, traditional subjective thinking of “I like this” or “I dislike this” is [...]