News
38
previous article
SPILL TRACK OF THE WEEK: THE STRANGLERS - "IF SOMETHING'S GOING TO KILL ME (IT MIGHT AS WELL BE LOVE)"
next article
SPILL NEW MUSIC: ROBERT PLANT & ALISON KRAUSS REUNITE FOR 'RAISE THE ROOF' OUT NOVEMBER 19 ON ROUNDER RECORDS 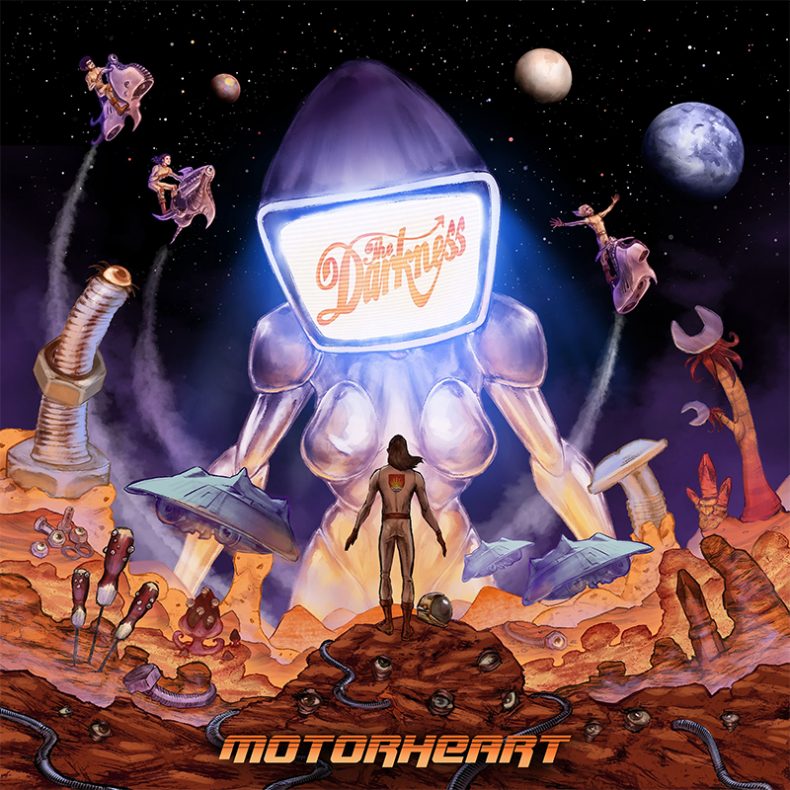 Brimming with their trademark blazing guitar riffs, solos and soaring falsetto, below is the lyric video for the first single, the title track of The Darkness’ newest opus. Of the song Justin says, “’Motorheart’ rocks harder than anything we’ve done before. It makes me happy and proud to crank it up and literally shake my Swiss chalet to its foundations. Dan did an awesome job on the production, it’ll take your face off, but your skull will be grinning from meatus to meatus. Please, to enjoy.”

Paying homage to a devoted sex robot named Motorheart, the album growls, pounds and stomps with Rufus Taylor’s drums, Frankie Poullain’s bass and Justin & Dan Hawkins’ guitars all turned up to 11, whilst Justin’s trademark vocals soar to ever more earthquaking levels. Drop the needle anywhere on Motorheart and be instantly transported from this moaning and weeping vale of tears to Elysian fields of rock where all hands are raised, the drinks – just as in the Club Tropicana of yore – are free, and everyone wears a pleasingly salacious grin. Does it rock? Is the sun hot? Has your partner’s touch grown cold? The Darkness are the Orwellian boot stamping on the flaccid face of limp rock, forever!

Welcome Tae Glasgae
It’s Love, Jim
Motorheart
The Power And The Glory Of Love
Jussy’s Girl
Sticky Situations
Nobody Can See Me Cry
Eastbound
Speed Of The Nite Time
*You Don’t Have To Be Crazy About Me… But It Helps
*It’s A Love Thang (You Wouldn’t Understand)
*So Long

With a back catalogue overflowing with sonic gold and a live reputation that most bands can only dream of attaining, The Darkness has established themselves as one of the most loved and important British rock bands of our time. Their last album, 2019’s Easter Is Cancelled, became the band’s fourth Top 10 album in the UK, whilst also topping the Official Charts Top 40 Rock Chart and the iTunes Rock Chart, alongside receiving swaths of critical praise.

The Darkness will be showcasing the live potency of Motorheart on their extensive 22-date UK headline tour starting in November. The band will be making it over to the North American shores in 2022. Keep up with all their live dates HERE.

SPILL NEWS strives to keep our readers up to date with news and events in the music industry. We keep you informed of the most recent information regarding new releases, tour dates, and information items about your favourite artists.
RELATED ARTICLES
cooking vinyljustin hawkinsmotorheart