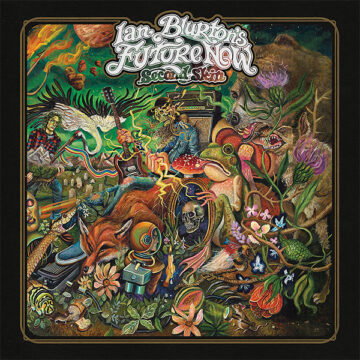 Opening with the psychedelic, acid washed doom of “Like A Ghost”, Blurton and Future Now immediately set the tone and stoke excitement for their debut. The riff heavy track feels unearthed as if it was pulled from a lost reel from the ‘70s that saw a collision between The Stooges and Black Sabbath. By large, “Like A Ghost” is a kick ass opening track that will pull in listeners with raw fervor as the strongest song on the album. The following title track comes close to this, however, as “Second Skin” offers a progressive sonic journey over the course of seven minutes brimming with bombast as the band approaches thrash metal with a rich sense of melody. If “Second Skin” demonstrates anything, it is that Blurton is not afraid to put creative risks at the forefront of his songwriting, and when he does so, Future Now soars with a sense of reckless abandon.

While there are many strong songs and shining moments across Second Skin’s nine tracks, the record struggles to live up to the massive highs of the opening three songs. In addition to “Like A Ghost” and “Second Skin”, “The Power Of No” is an exceptional example of stoner rock, so much so that you’d wrongly assume that Tony Iommi was playing the sludgy riff creating a genuine atmosphere of doom. While there is plenty of this found throughout the album – from the massive drum into of “Orchestrated Illusions”, the haunting instrumental breaks on “Beyond Beholds The Moon”, and the massive choruses of the closing “Trails To The Gate/Second Skin Reprise” – much of Second Skin falls into less adventurous territory than its high points. Polished harmonies, major keys, and the abundance of harmonized dual guitar lines leave Second Skin feeling as though Blurton is longing for the ’80s without the precision to make his nostalgia stick.

Ian Blurton’s Future Now shines bright despite an inconsistent debut record. Second Skin catches the band at their strongest when they dig deep into darker and grittier tones with songwriting that takes creative risks, creating a raw sense of danger. It is this element that makes Blurton’s Future Now stand out among the growing new wave of classic rock inspired music. Had Second Skin been an EP collecting the absolute best of its nine songs, Blurton very well could have been sitting on an incredible debut release. Instead, Second Skin stands as a solid release that should excite fans to see when Blurton and his latest band will go next.