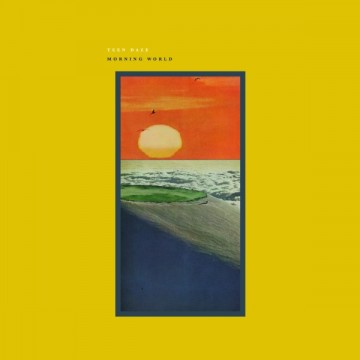 Earlier this year, Vancouver’s Teen Daze released his first album for Paper Bag Records.  Morning World was recorded with John Vanderslice at Tiny Telephone, his all-analog studio in San Francisco with co-producer Simon Bridgefoot. Teen Daze will be touring Europe in support of the release.  Full details can be found below.

Order the album here from iTunes.  Order the CD and vinyl here from Paper Bag Records.

In 2010, Jamison, the person behind Teen Daze, had no idea what Four More Years would bring. That debut EP, a collection of blissful home recordings, was the work of a carefree 24 year-old. By 2012, things had changed, as they tend to do: relationships dissolved, illness affected his family, windows for outward communication were closing. The gravity of it all made for constant output; he reached for futuristic utopia with All Of Us, Together, found a devotional sanctuary inside The Inner Mansions, and embraced hibernation on Glacier. In hindsight, this was an artist coping through various forms of introverted escapism.

While proud of the material, Jamison sought to break this cycle when approaching the next record. He knew it would take a few leaps of faith, most directly: out of his bedroom… out of his comfort zone. For the first time, he gave up some control, inviting the input of others. Bearing over 30 demos, Jamison joined one of his musical heroes John Vanderslice at Tiny Telephone, his all-analog studio in San Francisco. Beyond the immediate sonic advantages of recording to tape, the sessions with Vanderslice and co-producer Simon Bridgefoot encouraged a new positivity and confidence to his craft.

SPILL NEWS strives to keep our readers up to date with news and events in the music industry. We keep you informed of the most recent information regarding new releases, tour dates, and information items about your favourite artists.
RELATED ARTICLES
morning worldnewspaper bag records

by Andrew Smith on February 6, 2017
THEMES FOR DYING EARTH AN INTERVIEW WITH TEEN DAZE Vancouver’s Teen Daze arose out of the music blog craze in 2010. After 7 years, some travel, a lot of evolution, maturing and newfound experiences, Jamison has found a steady balance of life, [...]
7.0