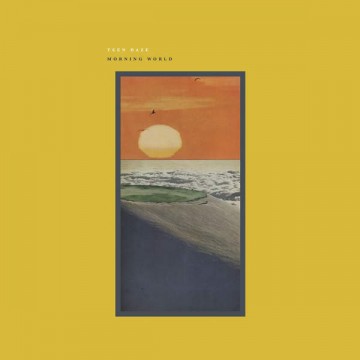 Laced with crunchy guitars, tastefully used strings, and plenty of synthesizers, Morning World sounds cinematic at times, like it could soundtrack a dialogue-free film or a commercial. The newest release from British Columbian musician Jamison, better known as Teen Daze, starts out with a Vitamin String Quartet-esque orchestral tremolo, reminiscent of Trent Reznor and Atticus Ross’s work in The Social Network soundtrack. The song then shifts into the mellow, cyclical sounds of the opening track, which sets the tone for the rest of the record.

The work as a whole evokes an image of driving on the highway at dusk, returning home after a long road trip. The light is fading, the lights of the cars and cities along the way are blurring.

Album highlight “Post Storm” feels simultaneously epic and fragile, while “Along” is downright groovy. “Life In The Sea” is possibly Teen daze’s most commercial-sounding tune yet. What weaken the album are Jamison’s vocals, which are grating at times – Jamison shines brightest when creating beautiful instrumental quilts.

Overall, Morning World is easily Teen Daze’s most accomplished release to date, and is definitely worth considering.

Maria Sokulsky-Dolnycky is a 23-year-old culture enthusiast born and raised in Toronto. She is a recent graduate of the University of Toronto, where she studied linguistics, German, and music history & culture. When not listening to or making music, she can be found exploring the city’s many neighbourhoods on foot, cycling by the lake, devouring films, or scouring Toronto’s many libraries in search of her next favourite book.
RELATED ARTICLES
album reviewsmorning worldpaper bag records
8.0