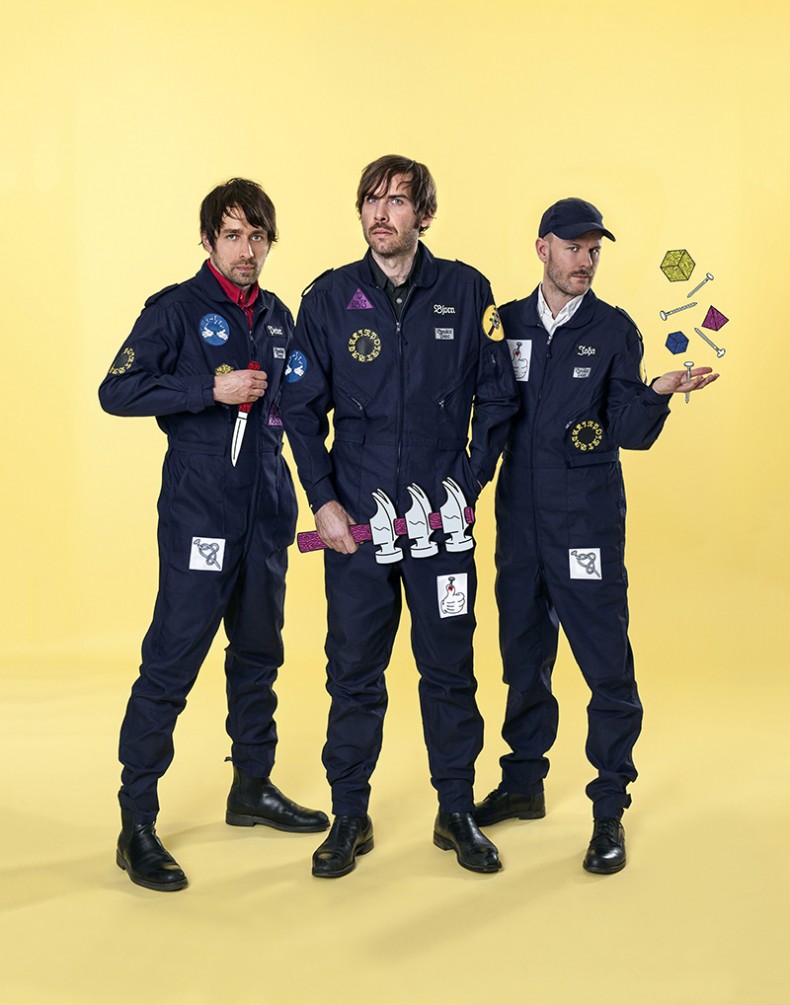 Peter Bjorn and John are excited to announce the release of their seventh full-length studio album Breakin’ Point.  The album marks their first new release in more than five years and is due out June 10, 2016 through their own imprint INGRID with the help of Kobalt Label Services.   On Breakin’ Point the band had the opportunity to work with an impressive group of producers including Patrick Berger (Icona Pop, Robyn), Paul Epworth (Florence And The Machine, U2, Paul McCartney), Greg Kurstin (Sia, Adele), Emile Haynie (Lana Del Rey, FKA Twigs, Kanye West), Pontus Winnberg (Miike Snow) and Thom Monahan (Wild Nothing, Devendra Banhart).

To celebrate the announcement, Peter Bjorn and John are revealing their first new album track “What You Talking About” .

Breakin’ Point is the follow up to 2011’s critically acclaimed album Gimme Some – which was the first release to find the trio working with outside producers.  When asked about the decision to again venture outside for production help Bjorn says, “You behave better when you have people over for dinner that aren’t just your family,” and further commented that “it wasn’t that we just brought in anyone.  We really respect what these guys do.  We wanted to make pop music that was relevant now and not in a fantasy world of what we thought would be relevant. We learned how to not dwell on stuff because you can’t sit forever.  You have to reach a goal. That was a little bit scary at first.”

The result is a phenomenal new album that finds the group reaching another career high.  While the trio’s previous record Gimme Some was Peter Bjorn and John’s guitar driven power pop record that beautifully captured the energy of the band’s live show, Breakin’ Point is about creating big pop songs, taking advantage of all that the studio has to offer and crafting an album that is complex while sounding effortless.

They are also thrilled to be releasing the album via their own label INGRID – which is part of the INGRID artist collective that they started in 2012 along with Andrew Wyatt and Pontus Winnberg from Miike Snow, Lykke Li, Coco Morier, Jocke Åhlund, Nille Perned and Jonas Torvestig.  The collective also includes a recording studio in Stockholm that was formerly used by ABBA and has hosted likes of Santigold, Haim, a-ha and Chrissie Hynde – whose album Bjorn produced and contributed writing to.

In addition, the trio has lent their talents to a long list of impressive artists over the past five years while recording Breakin’ Point.  Outside of Chrissie Hynde, Bjorn found himself in the studio with Lykke Li and Franz Ferdinand among others, John found himself recording with Wild Nothing and Ane Brun and remixing Neneh Cherry and Peter contributed his talents to records by Doe Paoro, RAC and Cass McCombs.  As a group, most recently you can find them on the new Yoko Ono album Yes I’m A Witch Too as well as Claptone’s debut album Charmer.

The band will be playing some North American, UK and European dates ahead of the June 10th album release.  Confirmed dates are below with more tour dates to be announced soon.  Tickets for the shows will be on sale today at 10AM EST.

SPILL NEWS strives to keep our readers up to date with news and events in the music industry. We keep you informed of the most recent information regarding new releases, tour dates, and information items about your favourite artists.
RELATED ARTICLES
breakin' pointingridnews