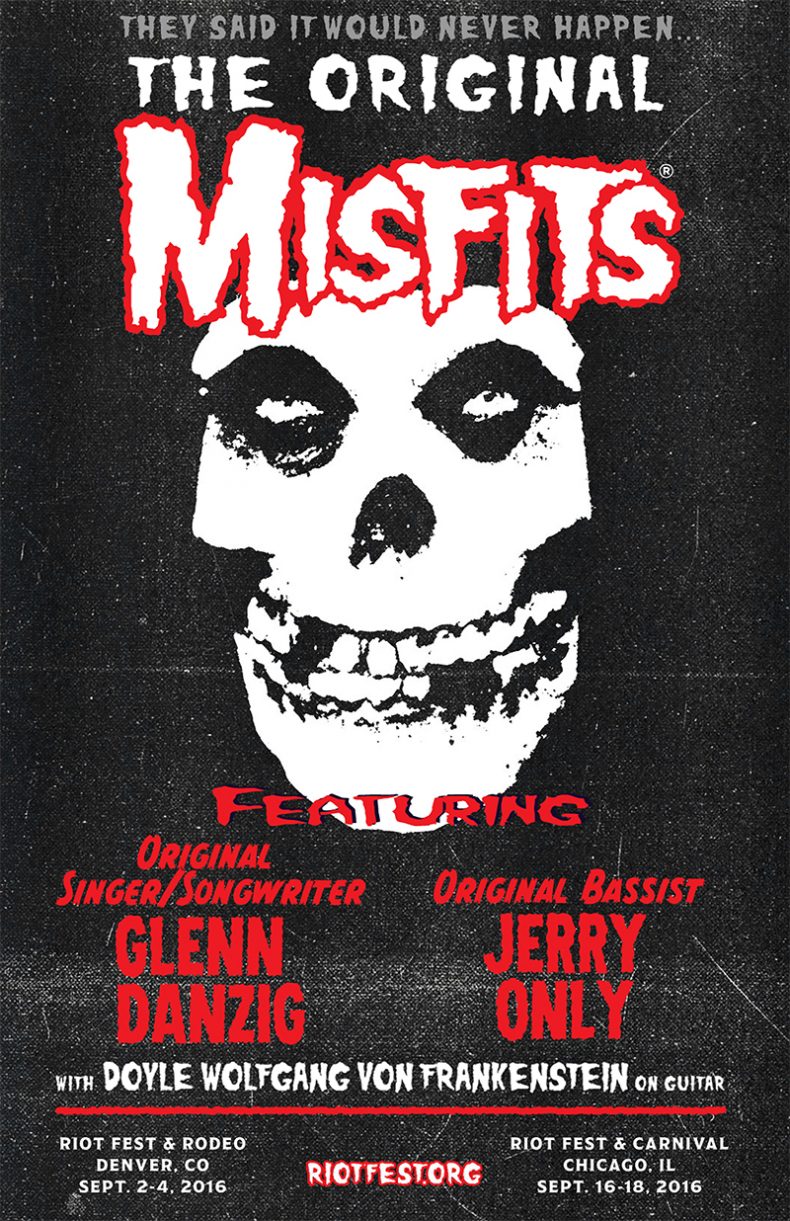 And they said it would never happen. Never!!

However, this September, Original Singer/Songwriter Glenn Danzig, Original Bassist Jerry Only and long-time Guitarist Doyle Wolfgang von Frankenstein – for the “First Time in Over 30-Years” – will be stepping onto stage together as “The Original MISFITS” to headline Riot Fest & Rodeo in Denver, CO (September 2-4, 2016) and Riot Fest & Carnival in Chicago, IL (September 16-18, 2016).

From the time of their first gig in 1977, the MISFITS and their iconic imagery went on to become one of the most crucially influential, genre-defying bands to ever emerge from North America, the MISFITS significance extends well beyond the narrowed path of punk rock & hardcore. Although not cognizant of how significant they would become, what the MISFITS achieved in their initial six-year window deconstructed and redefined rock music.

All the while, the MISFITS with Danzig’s unmistakable voice, Only’s ferocious bass sound and the bands anthemic songs, melody-induced choruses and authentically bruising musicianship, cemented their importance with all ensuing generations, whether in arena-filled metal shows or in a sweaty 400-cap club in Tucson. And for the ‘First Time in over Three Decades,’ legions of diehard fans from around the world will have the opportunity to hear the Original Band that created thousands of bands in their wake.

Full line-up announcements for Riot Fest 2016 will be happening shortly.

Riot Fest Three-Day Passes are now on sale and available on www.riotfest.org or www.ticketfly.com.

SPILL NEWS strives to keep our readers up to date with news and events in the music industry. We keep you informed of the most recent information regarding new releases, tour dates, and information items about your favourite artists.
RELATED ARTICLES
chicagodenvermisfits