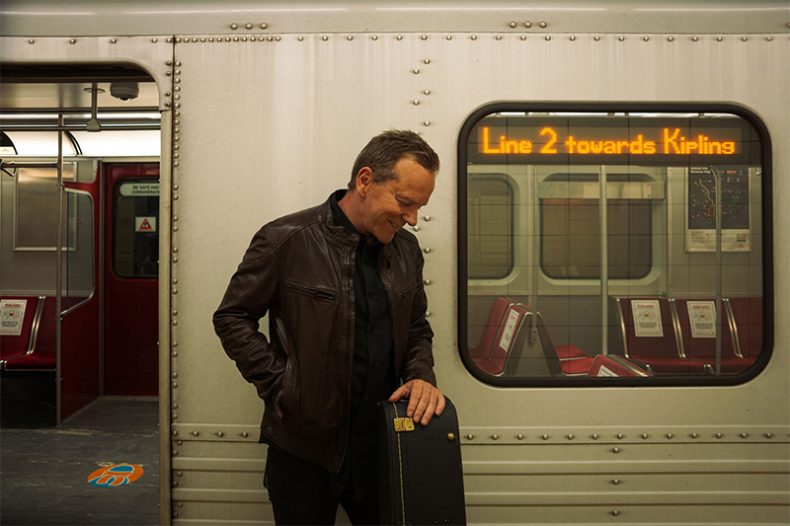 After announcing details of his upcoming third album Bloor Street, as well as an extensive UK and European tour, Kiefer Sutherland today shares the album’s new single and title track, along with its full tracklist. The Bloor Street album is set for release on January 21st via Pheromone Recordings.

The “Bloor Street” single provides a taste of what to expect from the album. A serene country-tinged rock ballad, “Bloor Street” finds Kiefer reflecting on his time growing up in Toronto, taking in the rush of the city alongside its biting winds and iconic skyline. The details are specific to the city, but the broader meaning is universal: wherever we grow up inevitably plays a part in shaping our future.

The single is released alongside an accompanying video. Directed by Tom Kirk at Hidden Road Studios, it extends the song’s poignant sense of nostalgia. Interspersed between cuts of Kiefer’s performance of the track are a montage of images of snapshots from Toronto’s history. That tender mood is enriched by personal photographs of Kiefer, dating all the way back to childhood.

Kiefer says, “They say you can never go home. This song, for me, says in your heart you never leave.”

The Bloor Street album presents a rich variety of sounds. “Two Stepping In Time” ups the tempo as Kiefer steps boldly into heartland rock territory to tell a story of a love that changes everything – a theme which he extends with both ‘So Full Of Love’ and “Chasing The Rain”. There are bigger surprises elsewhere, with the surprisingly tender “County Jail Gate” telling the tale of a life-long criminal who can’t stay out of prison, while the brighter production of “Goodbye” struts with a swaggering Stax R&B groove. Kiefer brings the curtain down on the album with “Down The Line”, a touching duet which brings heartache and hope in equal measure.

The album was produced and mixed by the multiple Grammy Award winner Chris Lord-Alge (Keith Urban, Carrie Underwood), and recorded at PLYRZ Studios in Los Angeles. It was then mastered by Ted Jensen at Sterling Sound.

Bloor Street is available to pre-order HERE. A range of limited edition signed ‘Bloor Street’ bundles are available, while formats include CD, black vinyl, a limited edition transparent orange vinyl, and an orange cassette. Two new variants are also launched today: a vinyl that’s exclusive to HMV, and a signed CD that’s only available via Amazon.

Tickets for his 2022 ‘Chasing The Rain’ tour are on sale HERE. The month-long tour includes his biggest shows to date in the UK and Ireland.

From Lost Boys and Stand By Me to 24, everyone knows about Kiefer Sutherland’s phenomenally successful acting career. Yet in recent years, he has focused on applying his masterful storytelling ability to music, with two acclaimed albums spanning a spectrum of country and Americana. His second album, 2019’s Reckless & Me, proved to be particularly popular in the UK. It debuted at #9 on the Official Albums Chart, and went straight to #1 on the Americana, Country and Independent album charts. It eventually became the UK’s second biggest selling country album of the year.

In addition to his music career, Kiefer Sutherland will be returning to our screens soon. He features alongside Chris Pine and Ben Foster in the film Violence of Action, and will play Franklin D. Roosevelt in the limited series ‘The First Lady’.

SPILL NEWS strives to keep our readers up to date with news and events in the music industry. We keep you informed of the most recent information regarding new releases, tour dates, and information items about your favourite artists.
RELATED ARTICLES
kiefer sutherlandnewspheromone recordings

by SPILL NEWS on May 4, 2016
KIEFER SUTHERLAND ADDED TO THE TD TORONTO JAZZ FESTIVAL LINEUP The 24 Actor Brings Debut Album to the Festival Stage Iconic movie and TV star, Kiefer Sutherland has [...]

by SPILL NEWS on March 12, 2016
SET FOR RELEASE THIS SUMMER Kiefer Sutherland will bring his rich, soulful vocals and guitar licks to venues across the country beginning April 14 when [...]